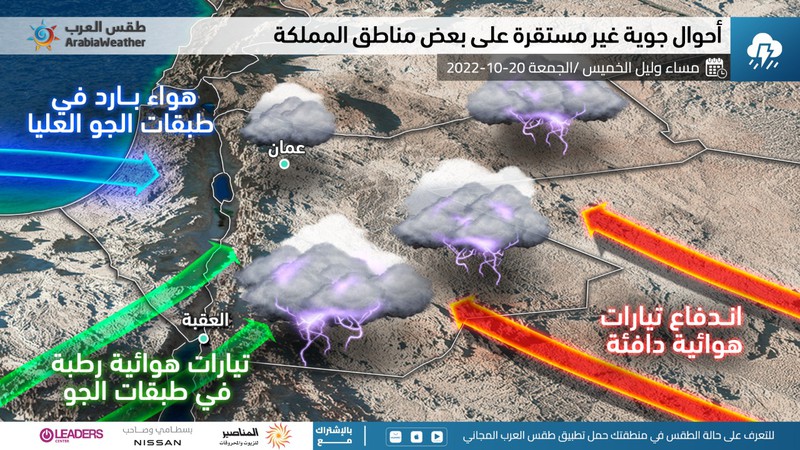 Arab Weather - The weather maps in the Arab Weather Center indicate that the Kingdom and the rest of the countries of the eastern basin of the Mediterranean Sea and Egypt are on a date with being affected by unstable weather conditions at the end of this week, causing weather fluctuations, including chances of thunder showers of rain in random areas, Some of them may be prolific in some narrow geographic ranges.

In the details, it is expected to cover an air rise extending over a vast area of the European continent, and as a result, a cold air mass rushes into the upper layers of the air from the latter and moves in the south and southwest direction towards the Black Sea Basin, and as a result of the continuity of the impact of the air rise on the center of the European continent, which works God willing, to push that cold and humid air mass to the south, i.e. towards the eastern basin of the Mediterranean Sea, which provokes the Red Sea depression by extending towards the north, in addition to that this convergence coincides with the flow of moisture in the different layers of the atmosphere, thus generating unstable weather conditions in random areas of the Kingdom God willing, concentrated in the south of the Kingdom. The nature of this impact on the Kingdom is still not completely clear, as the possibilities are many due to the many changes in the prevailing and expected air systems in the region. 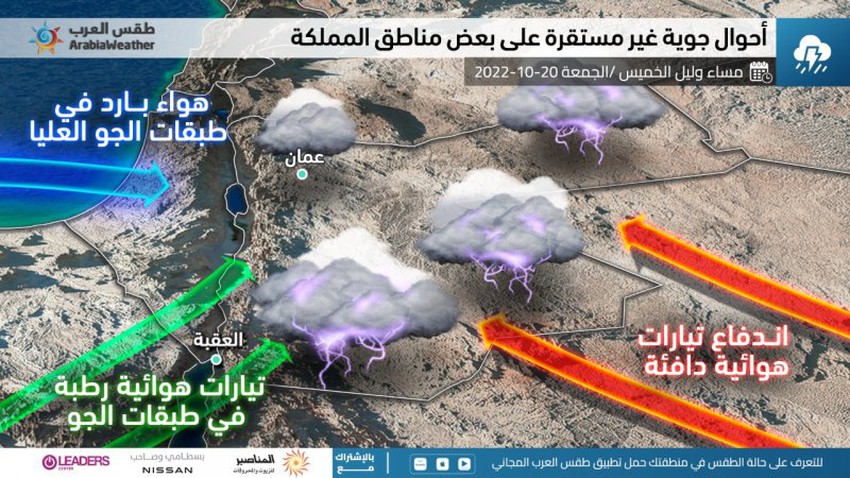 According to specialists in the "Arab Weather" Center, temperatures are expected to drop on Thursday and become slightly lower than the usual rates, and the weather will be moderate in autumn, and the opportunity gradually arises with the afternoon and evening hours for thunder showers of rain, God willing, in scattered areas of the south of the Kingdom. As the night hours pass, the influence of unstable weather conditions increases, so that the weather is generally relatively cold in most areas with the appearance of amounts of clouds at different altitudes, and thunderstorms of rain are expected, God willing, in random areas of the south of the Kingdom, perhaps heavy in some neighborhoods It is associated with hail, which may cause the flow of valleys, slopes and reefs, and extends to scattered and random parts of the north, central and eastern parts of the Kingdom, especially after the midnight hours.

It is expected that temperatures will remain slightly lower than their averages for this time of the year on Friday, and the weather will be mild in most areas. It is characterized by geographical irregularity in the precipitation, which will also be thunder, and this does not prevent it from being heavy in some areas, and the rain is not characterized by continuous continuity, as is the case with atmospheric depressions, but the weather will be very volatile from time to time and one region to another.