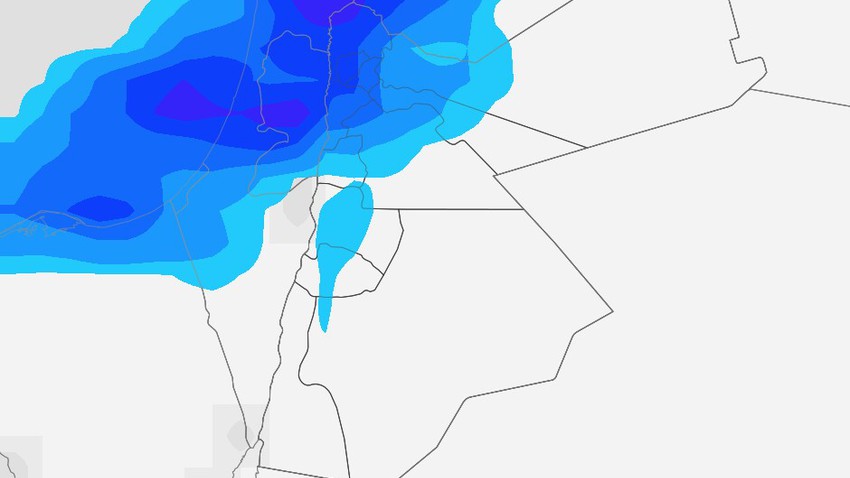 Weather of Arabia - God willing, it is expected that the Kingdom will be affected by the very cold air mass accompanying a second-degree depression on Monday, as temperatures drop further, and the weather is very cold in general.

Clouds appear at medium and low altitudes, and showers of rain continue to fall on different regions of the north and center of the Kingdom. The rains are of varying intensity and at intervals, and it is not excluded that they are mixed with snow over the high mountainous heights, with low clouds crossing and touching the surface of the earth working to form fog.

The wind will be southwesterly, moderate in speed, energizing at times, and accompanied by strong gusts in the eastern regions.

The depression has moved away on the evening and night of Monday/Tuesday, and the weather is very cold

The depression moves away from the Kingdom, the weather returns to stability, and there is a clear decrease in night temperatures compared to the previous nights, so that the temperatures are around below zero degrees Celsius in several parts of the Kingdom, and frost forms in various regions, and freezing and ice occur on wet roads.

Coinciding with the occurrence of a noticeable increase in surface humidity, the humidity level exceeds the 90% barrier in large areas of the Kingdom. Fog is formed in different regions of the eastern plains and the Badia regions. It is not excluded that the fog is sometimes thick, causing a decrease and possibly a lack of horizontal visibility.

The wind is variable direction, light to moderate speed.