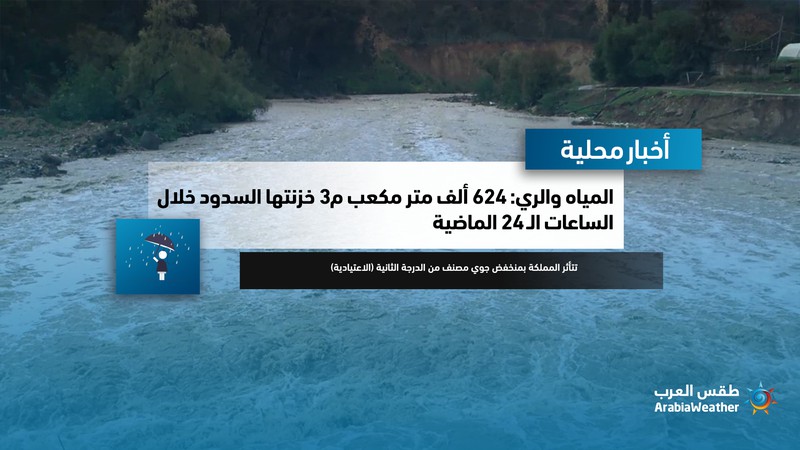 <p style=";text-align:left;direction:ltr">Weather of Arabia - The Ministry of Water and Irrigation said that the volume of rain falling from the beginning of the season amounted to about 1.151 billion m3 of the general annual rate, or 14.1% of the annual rate of 8.1 billion m3 annually, and that the highest rainfall rate was recorded during the 24 hours The last in Ajloun 33.8 mm.<br /> It indicated that the average rainfall, according to its stations, was recorded in the governorates of the Kingdom as follows:</p><p style=";text-align:left;direction:ltr"><br /> The capital averaged 11.9 mm, Balqa 16.8 mm, Madaba 10.3 mm, Zarqa 4 mm, Jerash 11.3 mm, Mafraq 6.1 mm, Irbid 9.1 mm, Ajloun 25.4 mm, Karak 0, 8 mm, Tafilah 2,2 mm, Aqaba 0,3 mm, Maan 0,3 mm.</p><p style=";text-align:left;direction:ltr"><br /> And about the quantities of water stored by the dams, according to the statistics of the Jordan Valley Authority until this morning, Saturday, during the past 24 hours, it showed that it amounted to 624.5 thousand cubic meters in Al-Wahda dams 104 thousand cubic meters, Wadi Al-Arab dam 9 thousand square meters, and Zaqlab 13.9 thousand square meters. Kafranja 44.8 thousand m3, King Talal 337.8 thousand m3, Wadi Shuaib 35.4 thousand m3 and Al-Kafreen 78.6 thousand m3, while the dams of the south, Zarqa Ma’in, Al-Walah, Al-Wala, Al-Tanour, Lajjun and Al-Karak, did not record the entry of any amounts of water from the rain, and the percentage of storage In the dams, it was indicated that it is currently 27,150 million m3, with a storage rate of 9.7% of the total energy of the dams, amounting to 280,759 million m3.</p><p style=";text-align:left;direction:ltr"><br /> The Ministry called on everyone to take advantage of all rainfall and store it in all available facilities to benefit from it in all uses in order to achieve national aspirations to enhance national water security, as well as not to throw waste and waste into the streams of valleys in order to preserve surface and ground water and to ensure that rainwater gutters are not connected to networks. Sewage .</p>