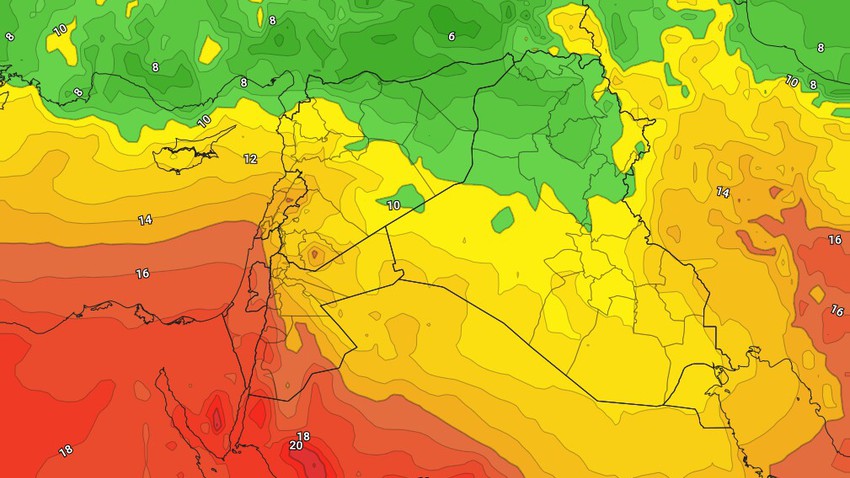 Arab Weather - The latest output of the numerical weather models processed by the Air Operations Department at the Arab Weather Center indicates that there is another slight decrease in temperatures to become lower than their rates for this time of the year on Friday, and the weather tends to be cold in the mountainous heights, pleasant in the rest of the regions The kingdom.

While it is warmer in the Jordan Valley, the Dead Sea and the city of Aqaba, some clouds appear at different heights, especially the low ones over parts of the Kingdom.

On Saturday, temperatures rose to above average

Temperatures rise again on Saturday to become slightly higher than their average rates as a result of the approach of the influence of a warm air mass accompanying an air rise in all layers of the atmosphere. Therefore, the autumn weather is generally pleasant, and warmer in the Jordan Valley, the Dead Sea and the city of Aqaba, with the appearance of some clouds at different altitudes.

It is expected, God willing, that the weather will continue to be cold in many areas during the late night hours, especially over the high mountainous heights and the eastern plains, which calls for wearing a coat while leaving the house, and the weather will be humid with Friday/Saturday night hours with an opportunity for fog to form in parts of the eastern plains and the Eastern Desert.

Southeast winds will increase on Saturday

The dry eastern winds also cause the feeling of coldness during the night and early morning hours.