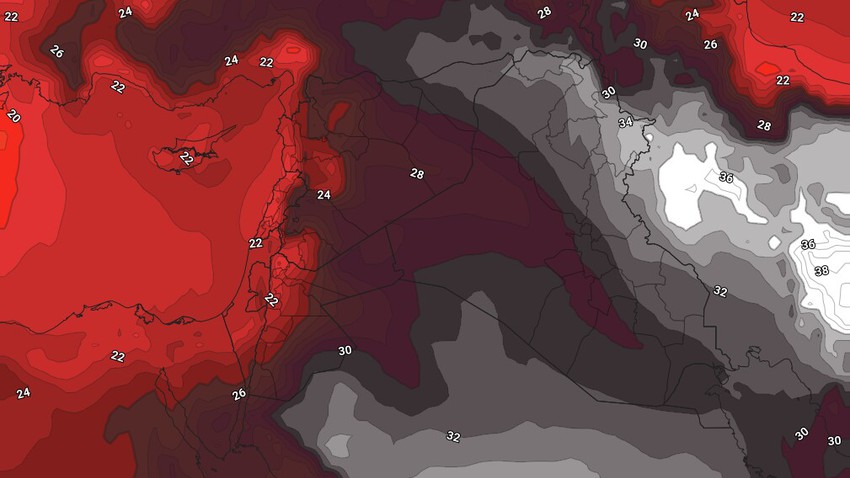 Arab Weather - The latest output of the numerical models received at the Arab Regional Weather Center indicates a rise in temperatures on Friday, which coincides with the day of Arafa to be around their rates for this time of the year, and the weather is normal summer in mountainous areas and relatively hot in the rest of the regions, and hot to severe Temperature in the Badia, the Jordan Valley, the Dead Sea and the city of Aqaba.

It is expected, God willing, that there will be a further rise in temperatures on Saturday (the first day of Eid al-Adha) to be around slightly higher than their average rates. The summer weather will be relatively hot during noon and afternoon hours in many areas, and very hot in the Jordan Valley, Dead Sea and Aqaba city In addition to the desert areas.

The weather is nice to temperate in many areas. It is suitable for outdoor seating during weekend nights when it is warm in the Jordan Valley, the Dead Sea and the city of Aqaba, in addition to parts of the eastern regions, with high surface humidity levels, especially in the northern regions, and low clouds gradually appear.

Westerly to northwesterly moderate winds blow over the Kingdom during the afternoon and evening hours on Friday and Saturday. They are sometimes active, especially in the mountainous and open areas, and they are dusty and dusty in the desert areas of the Kingdom.