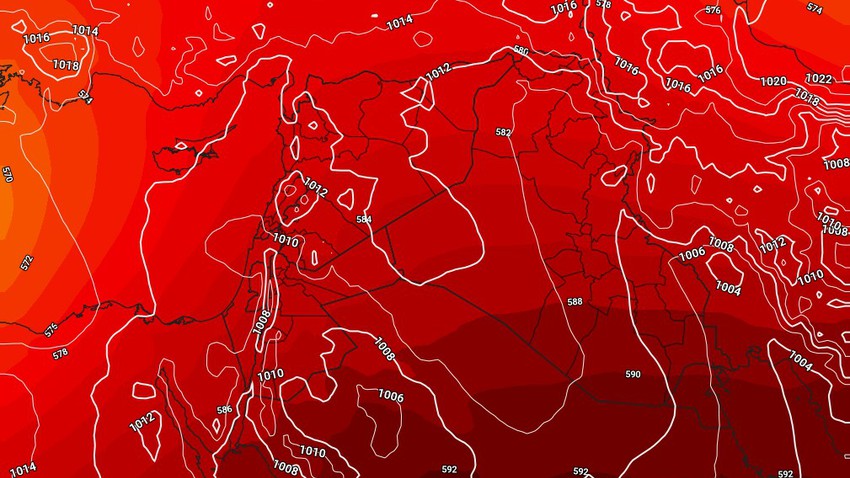 Arab weather - the latest outputs of the numerical models received at the Arab Regional Weather Center indicate that the Kingdom is affected by a relatively hot air mass as of Friday, so there is a further rise in temperatures to be higher than their rates for this time of the year, and the weather is warm to relatively hot In many areas, and hot in the Jordan Valley, the Dead Sea and the city of Aqaba, with some clouds scattering at medium and high altitudes, especially in the south and east of the Kingdom, and the winds are variable in direction and light to moderate in most regions of the Kingdom.

On Friday, the weather will be suitable for outdoor activities and swimming in various regions of the Kingdom, including the Dead Sea and the Gulf of Aqaba.

It is expected, God willing, that the Kingdom will be affected by the relatively hot air mass on Saturday, so there will be a further rise in temperatures to remain above their rates for this time of the year. The weather will be relatively hot in most areas, and hot in the Jordan Valley and the Dead Sea with the appearance of clouds at medium altitudes Especially high in the south of the kingdom.

Easterly to southeasterly moderate winds blow in the morning, active at times and causing dust and dust, so that the weather is dusty until noon, but from the afternoon and evening hours the wind turns to northwesterly moderate speed, sometimes active and leads to a decrease in dust rates from the western regions of the Kingdom.

The temperatures in the main cities and the capital, Amman, are around thirty degrees Celsius to a little higher, especially on Saturday, while they are between the mid and end of the thirties Celsius in the Jordan Valley and the Dead Sea.

Night temperatures rise at the end of the week

It is expected that night temperatures will rise on Friday/Saturday night, and the weather will become pleasant to moderate in various regions of the Kingdom.