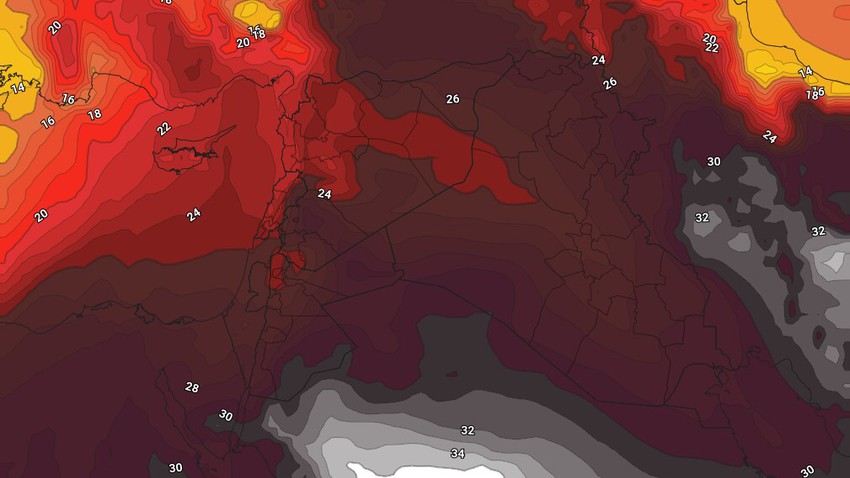 Arab Weather - The latest output of the numerical models received at the Arab Regional Weather Center indicates that the Kingdom is affected, as of Friday, by a relatively hot air mass, so there is a rise in temperatures to be higher than their rates for this time of the year, and the weather is normal summer in the western and mountainous regions of The Kingdom, and hot to very hot in the Jordan Valley, the Dead Sea and the city of Aqaba, in addition to the eastern Badia regions.

The effect of the relatively hot air mass increased Saturday

The effect of the relatively hot air mass on the Kingdom increases with Saturday and there is a further rise in temperatures to become relatively hot to hot in various regions of the Kingdom, and it is very hot in the Jordan Valley, Dead Sea and Aqaba city regions.

There is a clear rise in night temperatures compared to the previous nights, and the weather is moderate to warm in various regions of the Kingdom, especially during the early hours of the night.

The maximum temperatures in the main cities and the capital Amman are between the beginning and mid-thirties Celsius to a little higher in some cities and neighborhoods, especially on Saturday, while they are around the forties Celsius in the Jordan Valley, the Dead Sea and the city of Aqaba in addition to parts of the Badia.

At the end of the week, westerly to northwesterly moderate winds will blow over the Kingdom during the afternoon and evening hours. They are sometimes active and accompanied by strong gifts, especially in the mountainous and open areas, and they raise dust and dust in the eastern Badia regions.