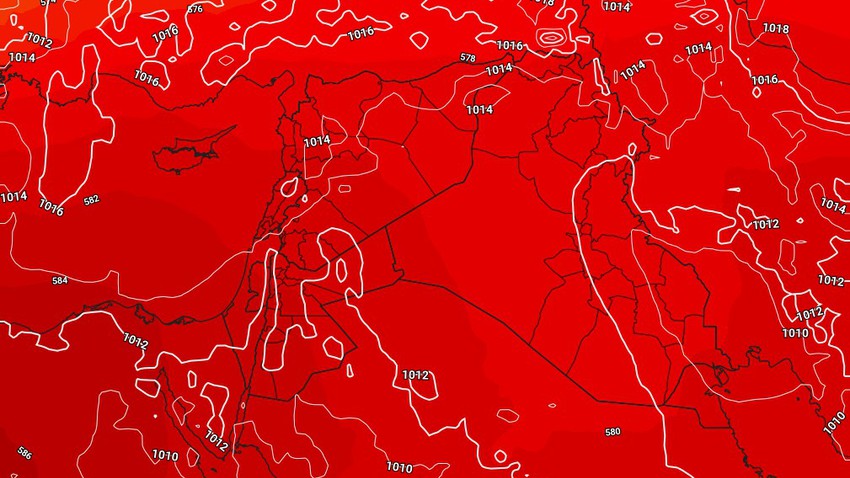 Arab Weather - A hot air mass is approaching the Kingdom on Friday, and the weather is warm over the mountain heights, and relatively hot in the rest of the regions, with the gradual emergence of clouds at different heights, and the winds are variable in direction and light to moderate in speed, sometimes active in some areas and causing dust in East of the Kingdom, especially in the afternoon hours.

Night temperatures increase in an additional and remarkable manner, and it lists moderate weather in various regions of the Kingdom, and the quantities of clouds increase in the airspace, and parts of the south and east of the Kingdom are affected by a weak state of atmospheric instability, and it is weakly possible that local showers of rain will fall in narrow and limited geographical areas, The winds will be northeasterly to northwesterly, light to moderate speed, and are active at times in some areas, and they will be southeasterly moderate to active speed at the far east of the Kingdom.

The Kingdom is affected by an early heat wave for such a time of the year on Saturday, and an additional rise in temperatures occurs, so that the weather becomes relatively hot in most Jordanian cities, and temperatures are in thirtieth levels above most regions, including the capital, Amman, and the weather is hot in the Jordan Valley. And the Dead Sea and Aqaba, with the emergence of clouds at different heights and there is a low probability of showers of rain in narrow geographical ranges from the south and east of the Kingdom, and the winds are fluctuating in direction and light to moderate speed.

An additional rise in night temperatures occurs, and the weather becomes warmer than usual relative to the hours of the night, and is relatively hot in the Jordan Valley, Dead Sea and Aqaba regions, and low and medium clouds appear with the possibility of showers of rain falling in narrow geographical ranges from The south and east of the kingdom, and the winds are fluctuating in direction and light to moderate speed, sometimes active in parts of the south and east of the kingdom.

1- It is recommended to drink a lot of liquids between Maghrib and the pre-dawn meal.

2- It is advised against long and direct exposure to sunlight.

3- Pay attention to the exit of snakes, and the spread of poisonous insects, coinciding with the high temperature.