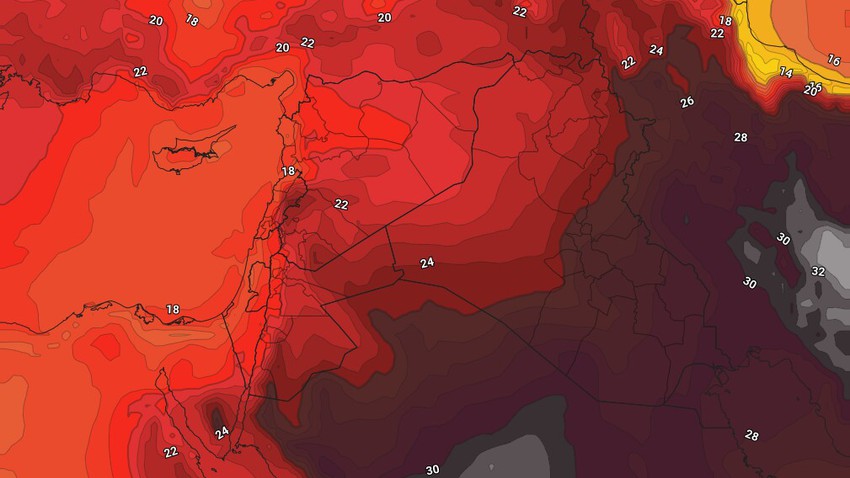 Arab weather - the latest updates of the outputs of numerical weather models indicate the continued flow of moderate-temperature air currents towards the Kingdom on Friday, where temperatures remain below their averages for this time of the year, and the weather is moderate in the mountainous heights, relatively hot in the Jordan Valley, the Dead Sea and parts of the desert , with the appearance of low and medium clouds, especially in the northern regions, during the afternoon and afternoon hours.

The winds are north to northwest, moderate in speed, sometimes active over some areas, especially in the north and east of the Kingdom.

There is a rise in temperatures on Saturday, as they become around their rates for this time of the year, and the weather is normal summer in the mountainous heights, hot in the Jordan Valley, the Dead Sea and Aqaba, with the appearance of medium clouds, especially in the eastern regions.

The winds will be northeasterly to northwesterly, light to moderate in speed, sometimes active over some areas.

Night temperatures are rising and the weather is getting nice

There is a slight rise in night temperatures on Friday/Saturday night, and the weather continues to be relatively cold in the mountainous heights and plains, with a significant rise in surface moisture levels, and the appearance of low clouds, and fog forms at the tops of the high mountain heights, and parts of the eastern plains, so It warns of the danger of low horizontal visibility, and it is recommended to wear a light coat when leaving the house when the night hours are late.

It is expected, God willing, that there will be a further rise in night temperatures with the hours of Saturday/Sunday night, as the weather becomes pleasant in most regions of the Kingdom, tends to be cold at late night hours and dawn in parts of the mountainous heights and plains, and humidity levels rise and low clouds appear, especially in northern regions.

• Be aware of the danger of low horizontal visibility in the mountains and plains as a result of fog formation.

• It is recommended to wear a light coat while leaving the house at late night hours, especially for residents of mountainous heights.

• Warning of increased chances of catching colds and seasonal diseases as a result of temperature differences in the coming days.