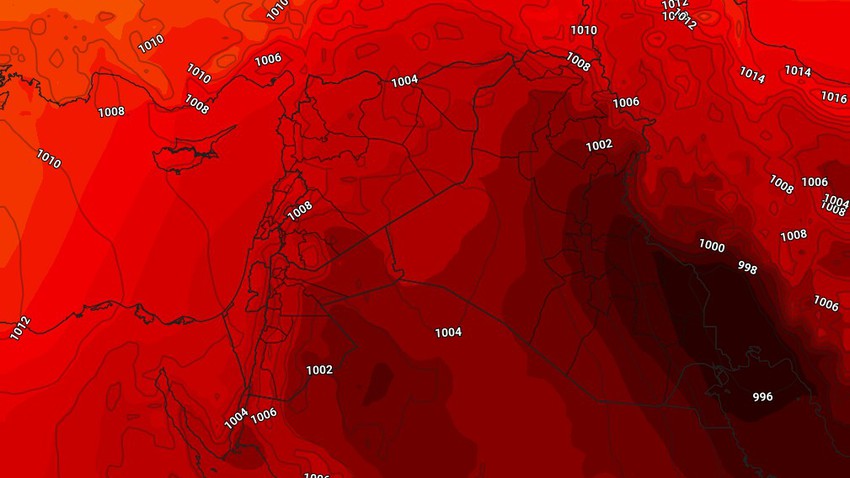 Arab Weather - The latest outputs of the numerical models received at the Arab Regional Weather Center indicate the increasing impact of the hot air mass on the Kingdom on Friday, especially in the eastern regions, so that there is a further rise in temperatures to be several degrees Celsius higher than their rates for this time of the year, The weather will be relatively hot to hot in various regions of the Kingdom, and very hot in the eastern regions, the Jordan Valley, the Dead Sea and the city of Aqaba, coinciding with the appearance of some clouds at high altitudes.

The temperatures are forty in the eastern regions

Maximum temperatures in the main cities and the capital Amman are around the mid-30s Celsius to a little higher in some cities and neighborhoods, especially on Friday so that they touch the late thirties in eastern parts of the capital Amman, while they are between the mid-thirties and early forties Celsius in the eastern regions, the Jordan Valley, the Dead Sea and the city of Amman. obstacle.

The effect of the hot air mass recedes from the western regions of the Kingdom on Saturday, so there is a decrease in temperatures to be around their rates for this time of the year, and the weather is normal summer in the mountainous and western regions, and hot to very hot in the rest of the regions.

Surface humidity levels also rise in the western regions late at night, and some low clouds may appear, especially in the northern regions.

Blowing of the northwest winds in the afternoon and evening

On Friday and Saturday, northwesterly moderate winds will blow over the Kingdom during the afternoon and evening hours. They are sometimes active, especially in the southern and eastern regions, and cause dust and dust in the desert regions of the Kingdom.