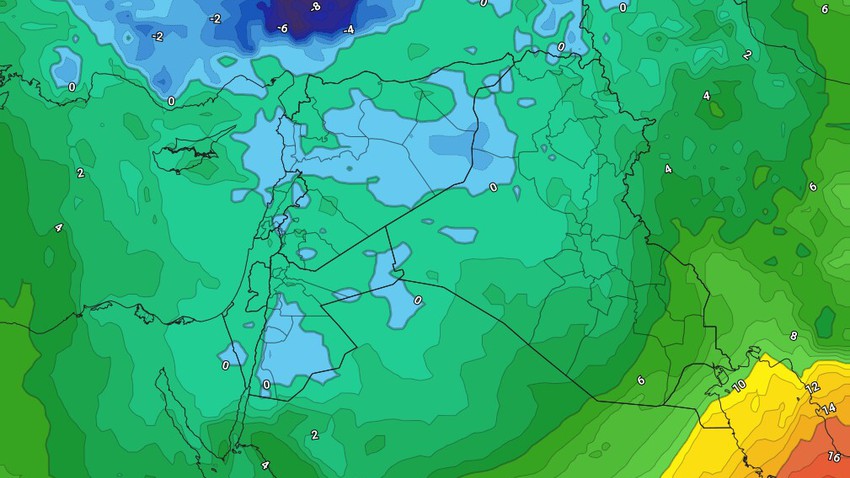 Weather of Arabia - a further decrease in temperatures will occur during the day on Friday, so that very cold weather prevails over the mountainous heights and remarkably cold in the rest of the regions, and the impact of the air activity will temporarily decline during the morning hours, with the opportunity remaining ready for separate showers of rain in the north The front of the cold air front that will cross the kingdom at noon.

The winds will be southwesterly to westerly, moderate, and their intensity increases with the near crossing of the air front and becomes active in speed and accompanied by strong gusts of up to 100 km / hour in some areas, which leads to raising dust and dust in desert areas and roads.

The Kingdom gradually crosses during noon hours a cold air front, with which the Kingdom begins to be affected by the air depression classified as a second-class (normal) depression, where showers of rain start from the northern regions that extend rapidly towards the central regions and reach parts of the southern and eastern regions. Of varying intensity, and abundant at intervals in some areas, especially the northern and central regions, sometimes accompanied by thunder, and showers of hail that may be dense sometimes, and it is not excluded that snow showers will fall over the high mountainous heights in the north, central and south of the Kingdom for a short period, and this coincides with the formation of fog Dense over mountain heights as a result of crossing low clouds in contact with the surface of the earth.

A gradual decline in the effect of the depression at night!

The impact of the atmospheric depression recedes on the Kingdom during the day of Saturday, and cold conditions prevail in most regions, with the emergence of low clouds, with the effect of which showers of rain are possible in some areas, while the weather remains cold to very cold at night, with an opportunity for frost formation in parts of The southern desert and the Al-Sharah Mountains, and it is possible again that sporadic showers of rain will fall in some areas, especially the far north of the Kingdom.