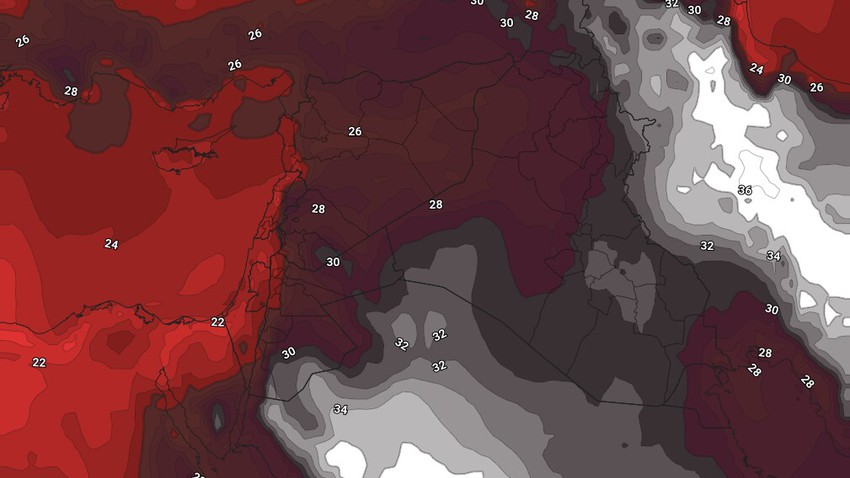 Arab weather - It is expected, God willing, that temperatures will remain around their averages for this time of the year on Sunday and Monday, and the weather will be normal summer in most regions of the Kingdom, hot in the Jordan Valley, Dead Sea and Aqaba, and clouds continue to appear at medium and low altitudes, especially in the northern regions.

Temperatures around below average Tuesday through Thursday

The temperatures drop in the second half of the week, becoming about less than their normal and usual rates for this time of the year, and the weather continues to be normal in summer in general, hot in the Jordan Valley, the Dead Sea and the city of Aqaba, with the continued appearance of clouds at low and medium altitudes.

According to the latest outputs of the numerical models, the weather during most nights of the week is expected to be mild to pleasant over all regions of the Kingdom, and may tend to be cold in some areas during the late night hours and dawn, especially with the second half of the week.

Coinciding with a significant rise in surface humidity, low clouds are formed and appear in large areas of the Kingdom, and the formation of fog is not excluded over the high mountainous heights, especially the northern ones.

The activity of the northwest winds continues during the afternoon

The northwest winds continue to blow over the Kingdom throughout the week, and they are moderate in speed, active in the afternoon and afternoon hours, and are accompanied by strong gusts that cause dust and dust in the desert and open areas.

The latest received indicators indicate an expected return to high temperatures by the end of the week, so that they become higher than their rates, and the weather returns to become relatively hot in most regions of the Kingdom.