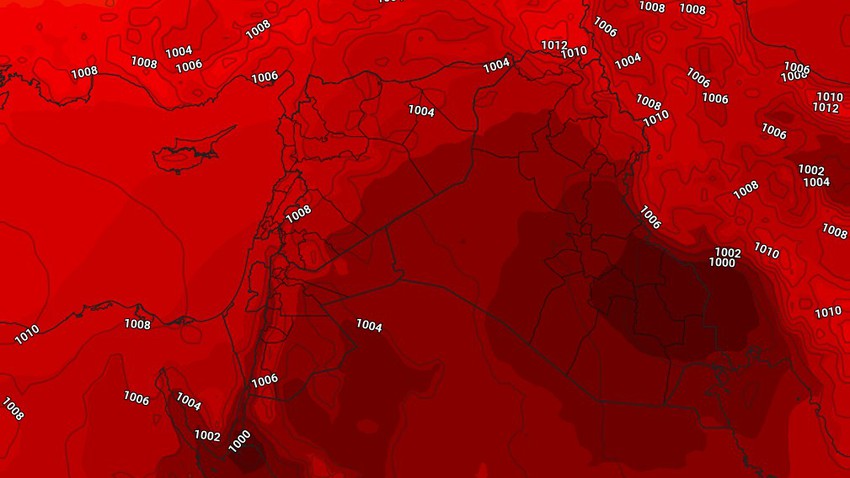 Arab weather - the latest outputs of the numerical models that are running indicate a decline in the heat wave effect from most regions of the Kingdom until the middle of the week, as temperatures decrease compared to the previous days while remaining higher than their rates, and the weather is relatively hot in most regions of the Kingdom, while it continues to be severe The temperature in the Jordan Valley, Aqaba and the Badia regions, so that the temperatures are forty in those regions.

With the appearance of some clouds at different altitudes, and moderate speed northwesterly winds, sometimes active in the afternoon and afternoon hours, causing dust and light dust in desert areas.

A drop in night temperatures until the middle of the week

It is expected, God willing, that night temperatures will decrease compared to the nights as of the previous Saturday night, and the weather will turn to become generally mild, with a noticeable increase in surface humidity levels.

Indications of the rebound of the effect of the hot air mass on the Kingdom, starting from Wednesday

The weather forecast staff in the Arab Weather Company monitors indications that the Kingdom will be affected by a new hot air mass on Wednesday and Thursday, so that temperatures will return to high and the weather will be hot in all regions of the Kingdom, very hot in the Jordan Valley, Aqaba and Badia regions, with the appearance of clouds at medium and high altitudes, especially in the Badia regions.

There is also a rise in night temperatures in the night hours, and the weather will be warmer than the previous nights, God willing.