Jordan | With the first climatic winter days, a sharp drop in temperatures on Wednesday and showers of rain in some areas 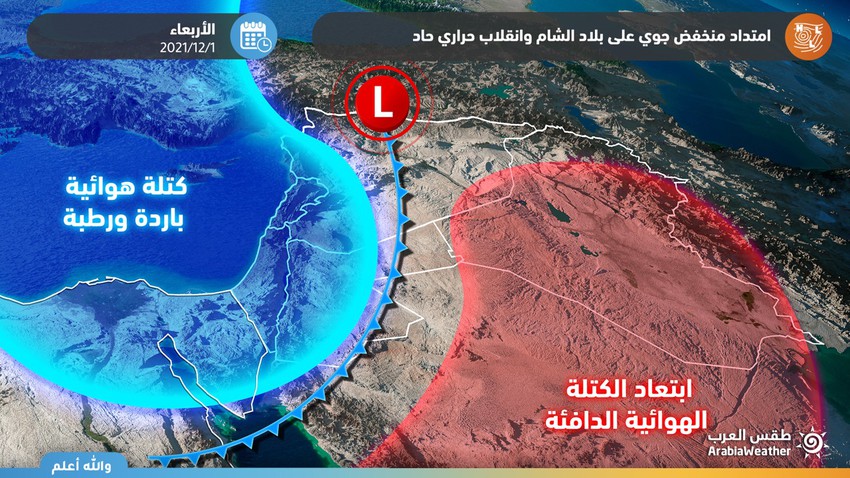 Arab weather - God willing, the Kingdom is expected to be affected by an air depression accompanied by a relatively cold and humid air mass, so there is a sharp drop in temperatures to drop by more than 10 degrees Celsius compared to Tuesday, and become around their rates for this time of the year, and the weather is Relatively cold and humid in many parts of the Kingdom, pleasant in the Jordan Valley, the Dead Sea and the city of Aqaba.

It is an active western speed, accompanied by strong flashes exceeding the barrier of 60 km / h in some areas, especially the eastern ones, which leads to raising dust and thick dust, and perhaps dusty waves in desert areas and roads with a decrease and perhaps a lack of horizontal visibility.

Amounts of low clouds appear, and showers of rain fall at intervals in the north and center of the Kingdom, sometimes extending to include parts of the southern mountainous heights, coinciding with the crossing of low clouds and touching the surface of the earth, working to form fog over the high mountain heights.

There is a clear drop in temperatures in the evening and night hours, and the weather is cold and humid in most regions of the Kingdom, especially in the eastern plains and high mountainous heights.

Low clouds continue to appear, and showers of rain fall on parts of the north, center and south of the Kingdom, which may sometimes extend towards some eastern regions, and low clouds cross and touch the surface of the earth, causing the formation of fog over the tops of the high mountain heights.

Winds will be westerly moderate in speed, energizing at times and causing dust and dust.

Winter is a Jordanian color.. Winter terms for Jordanians

Jordan: The Water Authority declares a state of emergency and mobilizes its crews to deal with weather conditions

Jordan - Update at 1:00 pm | Rain and snow showers continue over the Ajloun Heights