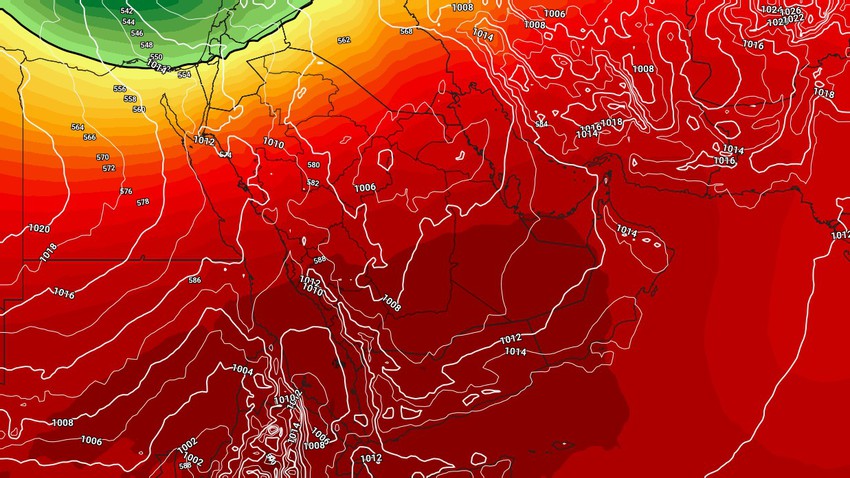 Arab Weather - The latest output of the numerical models received at the Arab Regional Weather Center indicates that Kuwait was affected again on Thursday by a five-year depression accompanied by a warm air mass, so there is a rise in temperatures to be higher than their rates for this time of the year, and the weather is relatively hot in Many areas, with light to moderate southeasterly to northwesterly winds blowing at times, active sometimes and causing dust in limited areas when active.

A drop in night temperatures on Thursday/Friday night

Kuwait continues to be affected by the Khamasini depression on Thursday/Friday night, but the night temperatures drop compared to the previous night, and the weather is pleasant to moderate, with moderate-speed southeasterly winds, sometimes active at late night hours and causing dust in limited areas when they are active.

The Khamasini depression is centered after midnight over Kuwait, causing winds from different directions that are light to moderate in speed, sometimes active and raise dust and dust when active, especially in the northern regions.

The five-year depression is moving away from Kuwait on Friday, and temperatures decrease but remain above their rates for this time of the year, and the weather is warm and dry in all regions, and there is a noticeable intensification of the speed of the northwest winds to be active speed and accompanied by strong gifts that work to raise dust and dust, and perhaps It is formed by dust waves, and it is not excluded that Kuwait will be affected by dust waves transmitted from Iraqi lands, causing a decrease in the horizontal visibility.

It is expected that amounts of clouds will appear at medium and high altitudes, and there is a weak possibility of local showers of rain in limited parts on Thursday and Friday.