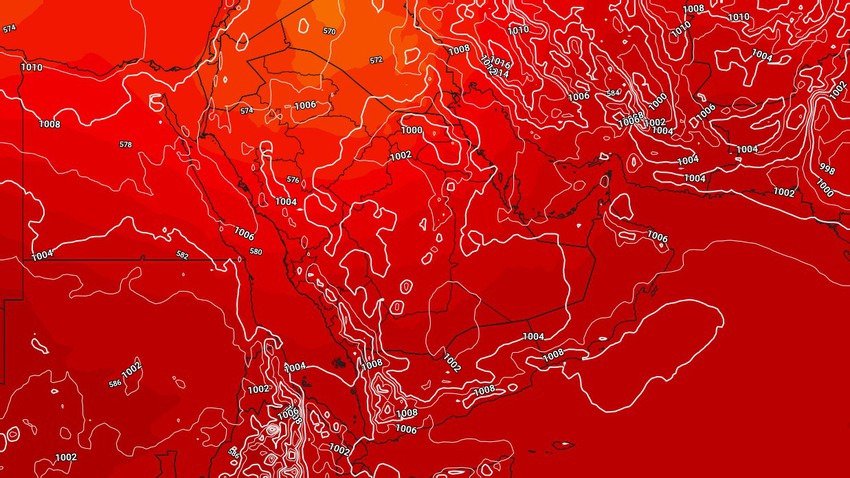 Arab Weather - The weather forecast staff at the Arab Regional Weather Center is monitoring the latest outputs of the numerical models, which now indicate the emergence of the first widespread spring state of atmospheric instability in Kuwait, gradually starting from Sunday evening and reaching its climax on Monday and Tuesday.

According to the same indicators, the chances of thunder showers of rain will rise, but over separate areas of the country as a result of the emergence of a state of atmospheric instability, but the outputs of the weather maps face difficulty in determining the places exposed to thunderstorms, while the weather forecast staff sees that the chances of rain will be more concentrated. In the interior regions, and it is not excluded that it will affect the capital, Kuwait, and according to the same outputs, it is not excluded that thick cumulus clouds will form, which leads to the presence of heavy rain, but in narrow geographic ranges, which causes the flow of valleys and the formation of sudden torrents, especially on Monday, and unstable weather conditions are actively accompanied by On the speed of surface winds that raise dust and dust, and the occurrence of thunderstorms sometimes.

But there is still enough time to make drastic changes to the readings of the numerical models, so it is difficult to go into details from now, and it is advised to follow the bulletins and weather updates that will be issued in the coming days.

Why are there indications of a state of atmospheric instability?

The reason behind the scientific reason is that there is an opportunity for the formation of unstable weather conditions as a result of the concentration of an air mass in the upper layers of the atmosphere over northern Iraq, coinciding with a superficial extension of the Red Sea thermal depression, coinciding with the presence of moist air currents in the layers of the atmosphere, especially the middle and high layers.