Kuwait | The flaming center of the very hot air mass will continue for the coming days, and the Al-Bawareh winds will renew their blows at the end of the week 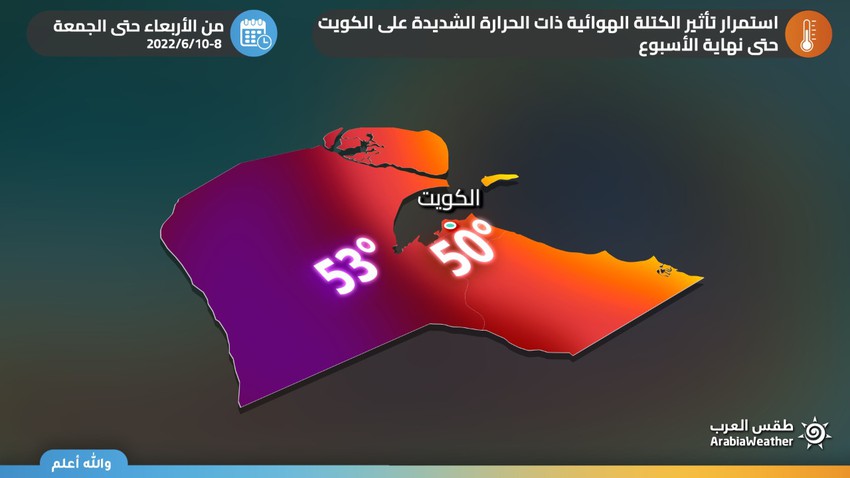 Arab weather - according to weather maps in the Arab Regional Weather Center, a flaming center of a very hot air mass has been positioned over the State of Kuwait for several days, and it is expected, God willing, that the very hot air mass will continue to be located over Kuwait during the remainder of the current week, accompanied by an increase in temperatures, especially on Wednesday Thursdays to be higher than their averages for this time of year, and the weather is very hot and exhausting in general.

According to the same outputs, it is expected that temperatures will be around 50 degrees Celsius in the interior and desert regions of Kuwait, and may exceed that in some areas, including Jahra. Western coming from land sometimes.

Temperatures tend to drop at the end of the week

The effect of the heat wave recedes slightly from Kuwait on Friday and Saturday, coinciding with the return of the Al-Bawarih winds or the moderate northwest winds to active speed, accompanied by strong blows that raise dust and dust and push dust waves from southern Iraq that lead to a significant decrease in the range of horizontal visibility, coinciding with the continuing The weather is hot, God willing.

Hot nights continue for the next days

It is expected that the weather will continue to be hot and annoying during the night hours over the coming days, and temperatures will be in the advanced thirtieth levels.