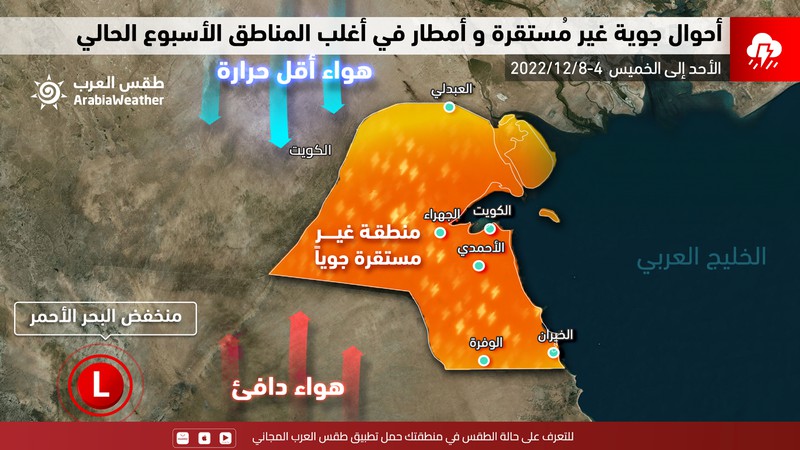 Weather of Arabia - The atmosphere of the State of Kuwait remains during the current week under the influence of a state of atmospheric instability, resulting from the rush of a cold air mass in the upper layers of the atmosphere, and its convergence with the extension of the Red Sea depression from the south, and it is also accompanied by a warm and moist air mass. This convergence and With the availability of moisture in all layers of the atmosphere, it works to renew rain from time to time and in separate areas of the country during the coming days, God willing.

And in the details, the weather is expected to be pleasant in most areas during the day on Monday and partly cloudy with clouds at different heights, and it is weak due to scattered showers of rain in some areas. And towards the evening and night hours, and as the cold air in the upper layers of the atmosphere approaches the country’s atmosphere, the chances of showers of rain increase in different parts of the country, which may be accompanied by the occurrence of thunder sometimes, God willing.

As for Tuesday, the country will be increasingly affected by the state of atmospheric instability, with the deepening of cold air in the layers of the atmosphere and its convergence with an extension of the Red Sea depression, so that the opportunity is ripe for thunderstorms of rain, God willing, in separate areas of the country, these precipitations may be heavy in some Neighborhoods and geographical ranges, especially the south of the country, are associated with hail, which may cause a rise in the water level in some areas.