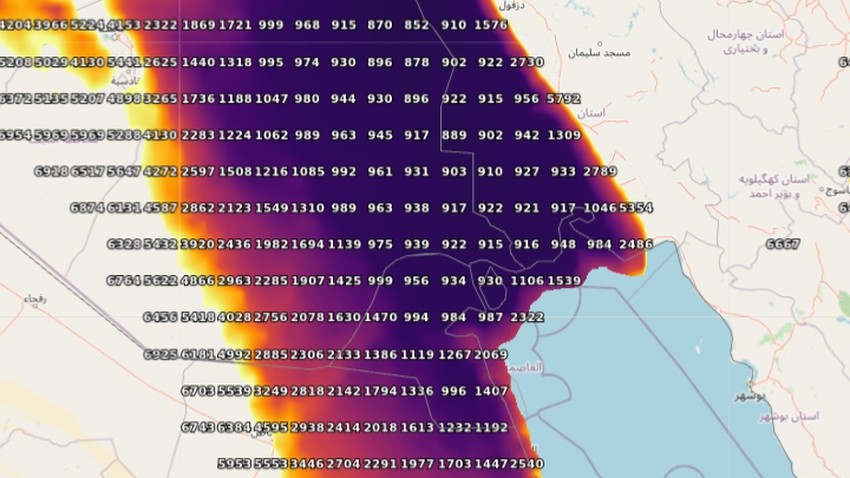 Arab Weather - The latest output of the numerical models processed by the Weather Operations Department at the Arab Regional Weather Center indicates that temperatures on Friday and Saturday remain around their rates for this time of the year, and the weather is very hot and disturbing in many areas, especially in the interior, coinciding with the occurrence of A remarkable rise in the proportion of dust in the atmosphere, and the weather is dusty to varying degrees.

Night temperatures remain high and the weather is hot and disturbing in all areas during the night hours, so that the temperatures are in the advanced thirties levels at the late night hours.

Temperatures in the mid-40s at the end of the week

It is expected that the maximum temperatures will be around the mid-40s Celsius in many regions, especially the interior ones, and may exceed that in some parts.

On Friday, active northwest winds will blow over Kuwait, accompanied by strong gusts that exceed the 60 km/h barrier and work to raise dust and dust, and the country may be affected by dust waves transmitted from Iraqi lands. Sultanate of Oman, which increases atmospheric pressure differences.

Where the northwest winds intensify to be active to strong speed, and the winds are accompanied by strong gusts that touch the 80 km/h barrier, especially on the northern and border areas with Iraq, which leads to the effects of dense dust and the formation of dust waves locally, and the winds are laden with dust transported from southern Iraq, which causes the occurrence of Significant decrease in the range of horizontal vision.

As a result of the force of the winds, sand encroachment occurs on the desert roads, and the waves rise in the beaches of Kuwait, especially the northern ones, so that the sea becomes turbulent with a wave height of one to one and a half meters.