Kuwait Weekly Bulletin | A exhausting heat wave is coming to the country, coinciding with dusty winds

Arab Weather - The latest output of the numerical models processed by the Air Operations Department at the Arab Regional Weather Center indicates the control of a very hot and flaming air mass over Kuwait, accompanied by a seasonal air temperature depression during the coming days that causes a stressful heat wave, as the weather is very hot in all regions Sunday, especially inland, while the measured temperatures drop on the coastal areas as a result of the gusts of moist sea winds that cause an increase in the sense of heat despite the decrease in the measured temperature.

The heat wave will intensify from the middle of the week

The heat wave intensifies in Kuwait starting from Monday and the middle of the week and remains until the end of the week at the very least, as the heat wave pervades all parts of the country, causing temperatures to rise clearly to be higher than their usual rates for this time of the year, and the heat wave causes very hot weather to prevail. And flames in all areas, even coastal ones, including Kuwait City, will be among the effects of this heat wave. 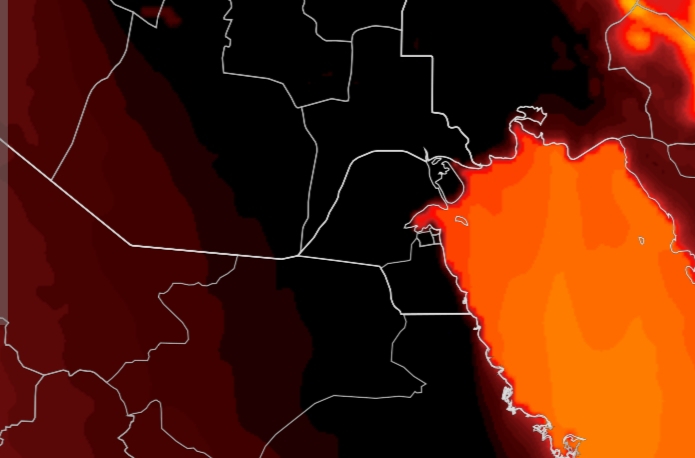 It is expected, after God’s will, that the maximum temperatures during the heat wave will be record, as temperatures will exceed 50 degrees Celsius in many parts of the country, especially the middle and end of the week, specifically in the desert and interior regions, and this time the fiftieth temperatures will also include the capital, Kuwait, including the region Kuwait international airport.

Active northwest winds and dust coincide with the heat wave

The surface thermal depression deepens over the Arabian Peninsula, causing a gradual intensification of northwesterly winds over the coming days over Kuwait, especially during the middle and end of the week, to be active in speed and accompanied by remarkably strong flashes, especially in the interior regions, causing dust and perhaps dust waves, which lead to low horizontal visibility. It negatively affects patients with respiratory system and eyes.

It is expected, God willing, that the night temperatures will rise, especially after the middle of the week, so that the temperatures will be around the forties degrees Celsius in the late times of the night, and the weather will be severe in all regions at night.