Kuwait Weekly Bulletin | Indications of the return of suffocating humidity in the atmosphere of the country, starting from the end of the week 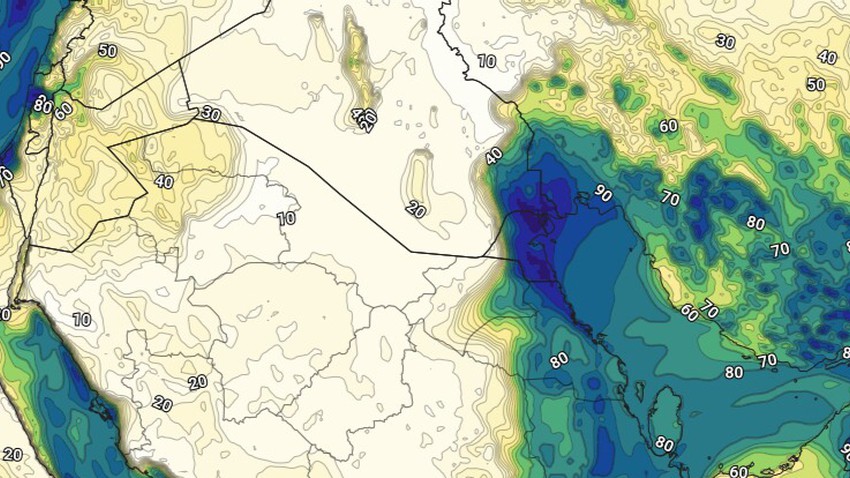 Arab Weather - The latest output of the numerical models processed by the Air Operations Department at the Arab Regional Weather Center indicates the continuation of the impact of the high temperature mass accompanying a seasonal atmospheric depression during the coming days, so that very hot weather prevails in most regions of the country, and the weather is humid in the coastal areas, which increases From the intensity of the sensation of heat.

The maximum temperatures measured during the coming days will be between the mid- to late forties Celsius in many areas, especially the interior and desert areas.

As of Thursday and during the weekend, Kuwait is affected by very humid southeasterly winds coming from the Arabian Gulf, so that the measured temperatures drop to be in the early forties, but as a result of the increase in surface humidity levels, the tangible temperatures (that the human body feels) increase dramatically. Double and the weather is very hot and suffocating in all regions.

It is expected that northwesterly to southeasterly moderate winds will blow over Kuwait, especially in the coastal areas, sometimes active. The northwest winds will be hot and dry and cause dust and dust in some areas, while the easterly winds will be humid and increase surface moisture levels.

Most of the time, nights are intense, especially in coastal areas