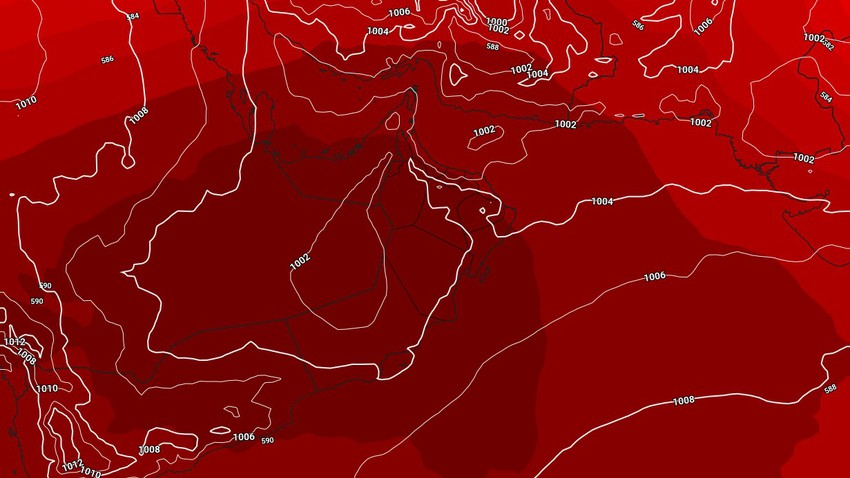 Arab Weather - The latest output of the numerical models processed by the Air Operations Department at the Arab Regional Weather Center indicates that Kuwait is increasingly affected by a hot air mass accompanying a low extension. Seasonal India on Sunday and Monday will cause another clear rise in temperatures in various regions of Kuwait, and severe weather prevails. The heat is exhausting in most regions of the country, especially in the interior. The temperatures are forty in many regions, especially in the interior.

The effect of the hot air mass temporarily decreased on Tuesday

The effect of the hot air mass temporarily recedes on Tuesday, so there is a clear drop in temperatures, and the weather becomes hot in most areas of Kuwait, and temperatures are in the thirties advanced in various regions of the country.

India's seasonal depression is intensified on the Arabian Peninsula and its impact extends to Kuwait again on Wednesday and during the rest of the week, so Kuwait is increasingly affected by a hot air mass and there is a significant rise in temperatures to return to their forty levels in many areas, and the weather becomes hot to very hot in most areas.

It is expected, God willing, that there will be a noticeable rise in night temperatures during the coming days, especially in the first half of the week, when the weather will be relatively hot in all regions during the night hours, but it will tend to moderate during the dawn hours over some interior regions.

The weather forecast cadre is monitoring the gusts of active northwesterly winds accompanied by very strong gusts on Mondays, which will affect Kuwait with strong dust waves transmitted from Iraq, which will cause a significant decrease in the range of horizontal visibility that may reach the point of non-existence, especially in the interior, especially in the interior. With the afternoon and evening hours of Monday, and according to the initial indicators, it is expected that the dusty waves will recede on Tuesday, but the weather will continue to be dusty at varying rates.