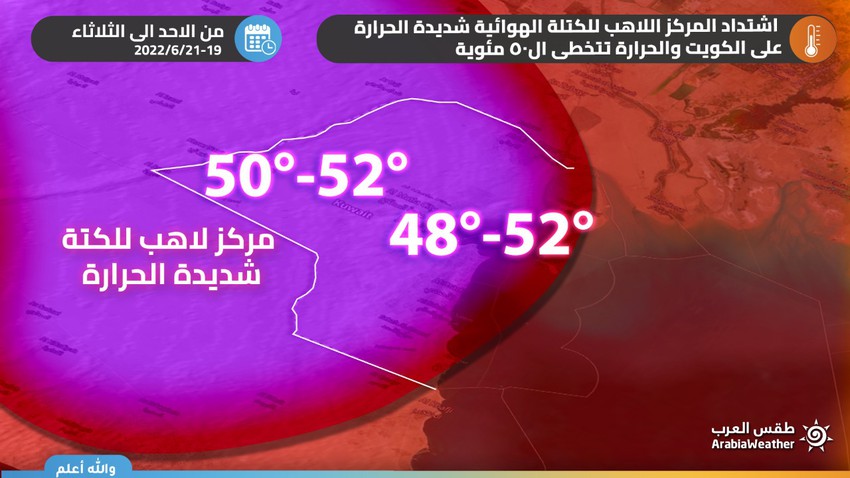 Arab Weather - The latest output of the numerical models processed by the Air Operations Department at the Arab Regional Weather Center indicates the intensification of the impact of the extremely hot and blazing center air mass on Kuwait during the coming days, so another rise in temperatures occurs in various regions of Kuwait, and very hot weather prevails It is exhausting in most parts of the country, especially in the interior.

Temperatures around 50 degrees Celsius, especially in the interior

It is expected, God willing, and with the intensification of the flaming center on Kuwait, that high temperatures touching 50 degrees Celsius will be recorded in the coming days, especially in the interior and desert regions of Kuwait, and may exceed that sometimes in some parts, including the Jahra region, while temperatures touch 50 degrees Celsius in the interior parts of Kuwait. The capital, Kuwait, as a result of the rush of very hot northwesterly winds, especially on Monday, and may exceed that in some parts, particularly the Kuwait International Airport area.

Hot nights most days of the week

Southeasterly to northwesterly winds in the coming days

It is expected that the coastal areas of the country will blow on Sunday and Monday moderately fast southeasterly winds coming from the Arabian Gulf, working to raise the humidity levels, which doubles the feeling of heat.

But on Tuesday and Wednesday, hot and dry northwesterly winds that are moderate to brisk and accompanied by strong gusts exceeding the 60 km/h barrier will move dust waves transmitted from Iraqi lands towards the country so that they gradually rise again, the proportions of dust in the atmosphere amid a decrease in the range of horizontal visibility. Especially in the interior.