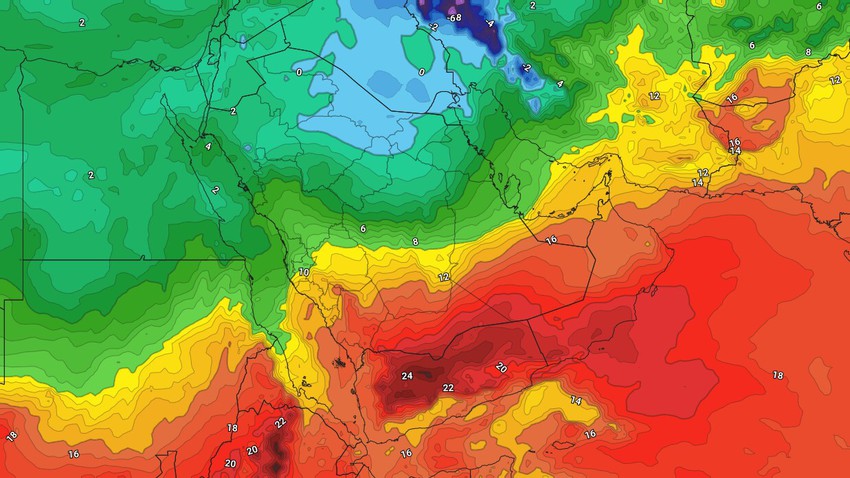 Arab Weather - The latest updates of the numerical model outputs received at the Weather Operations Department at the Arab Regional Weather Center indicate that temperatures remain higher than their average rates on Sunday, and the weather is generally pleasant during daylight hours with light to moderate fluctuating winds, and the weather is Cold on Sunday/Monday night and humid in all regions of the country with the appearance of some clouds at high altitudes.

There is a slight decrease in degrees, especially in the northern regions of Kuwait on Monday, and the weather tends to be cold to relatively cold during the day, and amounts of clouds appear at medium and high altitudes, and as a result there is a possibility of local showers of rain in some areas, and the winds are variable in direction to Northwesterly light to moderate speed, active sometimes and works to increase the sense of cold.

The outputs of the numerical weather models indicate the rush of a very cold and dry air mass towards Kuwait coming from Iraq, so there is a sharp and accelerating drop in temperatures and the weather is very cold on Monday/Tuesday night, and temperatures drop to be less than 5 degrees Celsius in several areas of Kuwait, With moderate northwest winds, they are sometimes active and significantly increase the sense of cold.

It is expected, God willing, that a very cold air mass will dominate Kuwait on Tuesday, so that temperatures will drop significantly, and the weather will be cold to very cold and sunny with moderate to brisk northwest winds that increase the sense of cold remarkably.

The effect of the very cold air mass deepens towards Kuwait with the night hours of Tuesday/Wednesday, where temperatures drop significantly to approach zero degrees at dawn in the border areas with Iraq and Saudi Arabia and the interior regions with the possibility of freezing, and are less than 5 degrees Celsius in the coastal areas.

The weather remains very cold on Wednesday, and the weather forecast staff at the Arab Regional Weather Center is monitoring the possibility of polar winds rushing again towards the region, including Kuwait, on Thursday and the end of the week, which means the continuation of very cold weather.

Kuwait - Weekend | The hot air mass continues, and dusty and dusty winds are on Saturday