Landslides .. what are they and why do they happen? 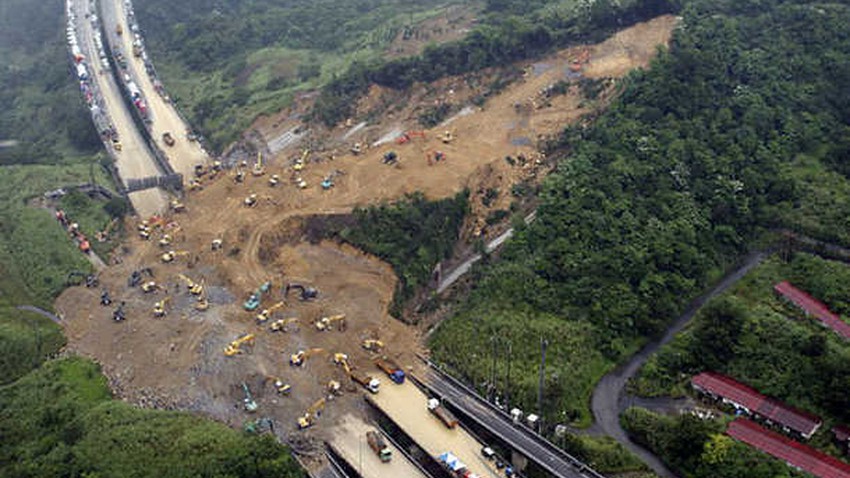 Arab weather - landslides are dangerous geological phenomena that occur in many countries of the world, and most of them occur without prior warning, so it is important to observe the warning signs and work quickly to reduce the resulting damage as much as possible, as landslides cause injuries, deaths and significant material damage every year.

Landslides are known as the movement of rocks, debris, or soil down a slope under the influence of gravity, and landslides vary in intensity, and they may be in the form of the fall of small or very large masses of rocks or the sliding and flow of large amounts of rocks and soil that may spread over a large area. In order for a landslide to occur and materials move and slide down the slopes, the force applied towards the bottom of the slope (mainly gravity) must have exceeded the cohesion force of the earth materials that make up the slope. Landslides can occur for one of these reasons or for several reasons combined, and the most important reasons that lead to landslides are:

Changes in the level of surface water, or groundwater.

Currents that cause soil erosion and decomposition.

Disturbance caused by human activities. Or any combination of these factors.

Could landslides occur under the sea?

Where do landslides occur?

The main areas of occurrence of landslides are coastal, mountainous and hilly areas. Also, burned forest areas become particularly vulnerable to debris flows, depending on soil characteristics and gradient conditions.

The following map shows places prone to landslides around the world:

How fast would a landslide move?

Landslides can move slowly (millimeters per year), and can move quickly and catastrophically, as is the case with debris flows. Debris flows can travel down a hill slope at speeds of up to 300 km / hr, depending on the slope angle, the material water content, and the size and type of debris.

Who is most at risk of landslides?

As people move to new habitable areas from hills or mountainous terrain, it is important to understand the nature of their potential exposure to landslide hazards, and how cities and towns can plan for land use, engineer new construction and infrastructure, and take measures that will reduce the damage and risk of landslides .

Although many landslides cannot be avoided, geological studies, good engineering practices and effective application of land use management regulations can reduce landslide risks. How do human activities cause landslides?

In some cases human activities can be a contributing factor in causing landslides , so many human-induced landslides can be avoided or mitigated. They are usually the result of road and building construction without proper study of slopes, lack of good drainage patterns, or work near old landslides. The landslide that occurred in the town of Thistle, in the state of Utah, in the United States, cost more than $ 200 million to repair. The landslide occurred during the spring of 1983, when the unusually warm weather caused the rapid melting of the ice and the slope was saturated with water, and the landslide destroyed the lines. The adjacent railway and highway, and also flowed across the Spanish Fork River, forming a dam, until the reserved river waters flooded the small town of Thistle, and the townspeople were evacuated.

Within one day, the city was completely covered with water. After the accident, a water drainage system was designed to avoid further potential disasters.