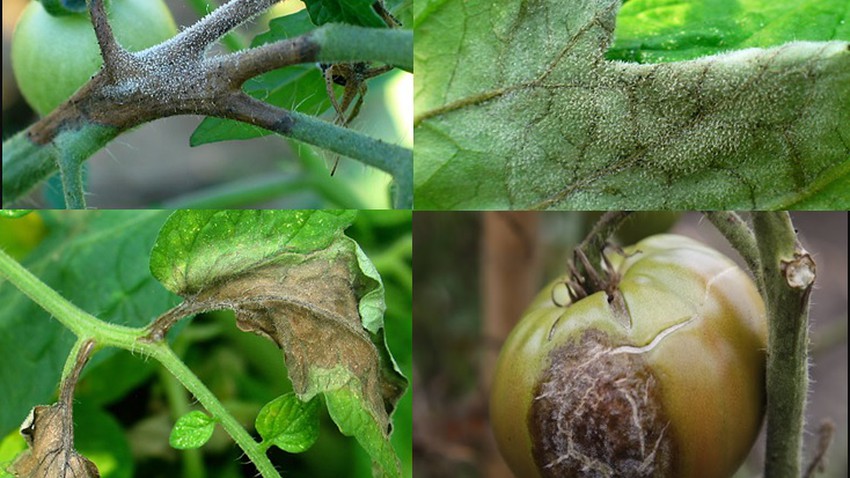 Arab Weather - At the beginning of this year (2021), the farmers of Al-Karak fell into a catastrophic victim that hit the most productive crop in the region. , To inflict heavy damage on more than 60% of the lands cultivated with tomatoes in the Al-Karak Valley regions.

The disease is called late blight because it comes late during the germination season, and Late Blight is known as a fungal disease that can affect potato and tomato plants. The disease began to appear during the nineteenth century in Peru and then moved to Europe, until it appeared in Ireland as an epidemic. It led to famine and emigration of many people, and now late blight is causing huge losses to potato and tomato crops all over the world.

Causes and symptoms of the disease

It produced late blight disease from a fungus called Viovthora Anevstens (Phytophtora Infestans), usually developing summit flowers and small legs are the most vulnerable to infection and rot, even mold up to large parts of the plant and eventually die, and begin the symptoms of the disease are often on the edges of the leaves of the plant in the form of Irregular brown spots, then spread over the rest of the parts of the leaf with the appearance of white fluff, as this fluff carries the spores of the fungus through which the fungus multiplies when carried by wind or water, and when the infection reaches the stem of the plant it ulcerates until it dries up and turns brown, and the fruits are the symptoms. With water spots that quickly expand to encompass the whole fruit.

The development of leaf rot or damage to the plant varies according to the environmental conditions, as humidity, temperature and the amount of light are among the most important factors affecting the spread of the disease, as pests spread in wet and cold environments when the temperature falls below 20 degrees Celsius.

In order to prevent the spread of the disease, the infected tubers or plant must be disposed of so that the pathogen does not remain in the soil or in the remains of the plants and transfer to the next season, as the fungus can survive in the infected potato tubers that remained in the soil from the previous season until the next season, as it is believed that Some seeds can be infected and harbor pathogens, and getting rid of the remains of infected plants is of great importance because the infected remains that were left from the previous season constitute the first pollen for the new crops, and during the growing season the infected residues continue to produce spores until the fungi invade the new shoots.

This disease can be avoided through the cultivation of resistant varieties, and it can also be resisted by using chemical pesticides, so that chemical spraying programs are applied before the disease is noticed, and this is especially done during cold winter periods that are the most favorable period for the spread of the disease, and spraying is done before the disease is noticed because Controlling it becomes difficult when the foliar infection spreads, and it is important to cover the whole plant with fungicides, as there are fungicides that move in the plant apparatus to the top, so spraying only the upper leaves keeps the lower leaves unprotected and vulnerable to infection, and it has been observed that excess nitrogen fertilization increases Susceptibility to infection, but an increase in phosphorus or potassium increases the degree of resistance, which calls for attention to organizing fertilization to prevent disease, and this has been possible, with the help of weather and meteorological forecasts, to prevent the occurrence of the disease, as wet nights often help the pollination and reproduction of the causative fungus For infection.

The effect of weather on disease emergence and spread

The emergence of late blight disease has increased in recent years, due to the development of new strains that are able to adapt to cold winter climates. The pest was spread slowly during warm nights in recent years, but with recent climate change and the presence of many fluctuations in temperature and precipitation, it was found. The disease has the appropriate conditions for it, which is humidity with a temperature between 12-15 degrees Celsius, which is the ideal conditions for the formation of spores and the occurrence of pollination and reproduction, while when the temperature rises above 15 degrees Celsius, the reproduction of the pest takes longer.