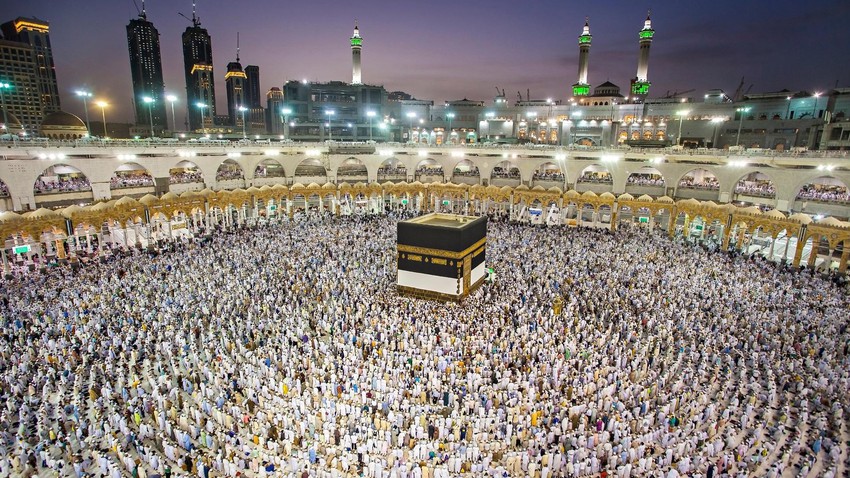 Weather of Arabia - Guests of the Most Merciful flock to the holy sites from various countries of the world this year to perform the Hajj during the Hajj season 1443-2022, after a two-year break due to the exceptional circumstances imposed by the Corona virus pandemic.

The increase in the costs of Hajj this year is due to several reasons, including:

The minimum cost of Hajj is estimated at 25 thousand dirhams, and it reaches 60 thousand and more for the so-called luxury pilgrimage, while the cost in 2019 ranged between 18 thousand and 45 thousand dirhams, according to statements by the managers of Hajj and Umrah companies to Emirati media, which means an increase between 33 % and 38 % between the previous and current seasons.

The lowest cost of Hajj is 1,650 Kuwaiti dinars ($5375), which is called the easy Hajj, while the cost of this type of pilgrimage in the Hajj season that preceded the Corona crisis was about 1,300 dinars ($4234), according to a statement by the Supreme Committee for Hajj and Umrah in Kuwait, which means An increase of nearly 27%.

The cost ranges between 2,700 Jordanian dinars ($3808) and 2,800 Jordanian dinars ($3949) in the West Bank, and the cost in the Gaza Strip increases to about 3,200 dinars ($4513) due to the different travel mechanism and fees at the crossings and movement from the Strip to Cairo to the Kingdom, which is The same prices as the previous season, according to the statements of the Palestinian Ministry of Religious Affairs.
The cost of Hajj for Palestinians inside the country is 30,000 shekels (8,704 dollars), an increase of 3,000 shekels (870 dollars) over the last Hajj season, an increase of 10%.

The Jordanian Ministry of Awqaf supervises the pilgrimage process for the Palestinians, whether in the West Bank or within the Green Line as well as the Gaza Strip.

The lowest cost for the Sudanese pilgrimage this season is two million and 117 thousand Sudanese pounds (4,637), while the highest cost is two million and 857 thousand pounds (6258 dollars).
The cost of Hajj varies according to the Sudanese states, as it decreases in the Red Sea states, where pilgrims travel to these states by sea, while the cost increases in the remote states located in the Darfur region in the far west, where pilgrims travel to Saudi Arabia via flights.

The cost of the Syrian pilgrimage for this season is 3,700 dollars, and in the last Hajj season in 2019, it was about 3 thousand dollars, which means a 23% increase in the cost.
It is worth noting that the Syrian pilgrimage file is in the hands of the Supreme Hajj Committee, which is affiliated with the Syrian opposition (the National Coalition for Revolutionary and Opposition Forces), after Saudi Arabia withdrew the file from the Syrian regime since 2012, a year after the outbreak of the revolution.

The cost of Yemeni pilgrimage for this season was set at 12,820 Saudi riyals ($3,416), and the average cost of Hajj in Yemen in the last season before the pandemic was $2,300, an increase of 30%, according to a statement by an official in the Yemeni Ministry of Endowments.

Before the National Unity Government issued a decision on May 29, requiring the state treasury to bear the full costs of the pilgrimage for Libyan pilgrims, the cost of the pilgrimage was about 32,000 dinars (6,500 dollars), with the authorities providing financial support for the pilgrims equivalent to half the amount.