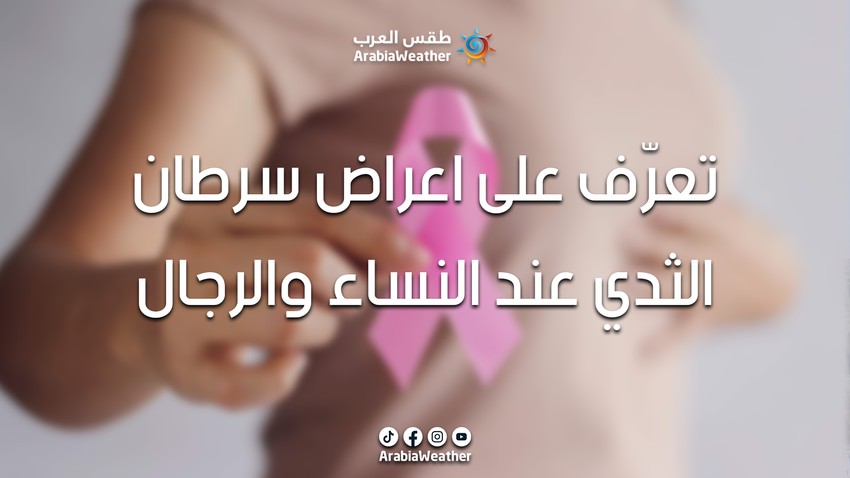 Weather of Arabia - Breast cancer is one of the most common malignant cancers in women, which may affect men as well, but the causes of breast cancer are still not known precisely so far.

Women, in particular, should know the symptoms of breast cancer. Therefore, medical institutions and medical staff in different countries are keen to conduct awareness campaigns about the signs of breast cancer, and also invite women to undergo early detection tests for breast cancer.

early breast cancer symptoms
A solid lump in breast tissue is the most well-known symptom of breast cancer, but there are other signs that may appear on the breast or nipple that may indicate breast cancer. Symptoms of breast tumors may also vary from person to person.

Here are the common early signs of breast cancer:

It is worth noting that some changes in the breast may result from benign conditions, and one of the symptoms of benign breast cancer is changes in skin texture resulting from eczema. But it is always recommended when you notice any change in the breast to visit the doctor and examine the breast.

Symptoms of invasive breast cancer include:

As for lobular carcinoma in situ, it cannot be diagnosed through a mammogram, and it often does not cause any of the symptoms of breast cancer. Therefore, this type of breast cancer is usually discovered if a breast biopsy is taken for other medical reasons.

Inflammatory breast cancer is characterized by the following symptoms:

It should be noted that the symptoms of inflammatory breast cancer may develop quickly, and the cancer may develop rapidly, so you should go to the doctor immediately as soon as you notice any sudden changes in the breast or nipple.

It's also worth noting that redness, swelling, itching, and pain in pregnant and breastfeeding women may be signs of a breast infection that may be treated with antibiotics. But despite this, you should see a doctor and have a breast examination as soon as you notice any symptoms of breast cancer.

Metastatic or metastatic breast cancer may not cause any symptoms, but other times there may be symptoms associated with the areas affected, such as:

Symptoms of breast cancer in men

There are some factors that increase the chance of developing breast cancer, including the following:

This examination is not completely accurate, but its importance lies in increasing the chance of early detection of breast cancer by noticing any change in the breast or feeling a lump in the chest.

The self-examination of the chest begins after the age of 20 years and is performed once a month, and if the woman is still menstruating, she should do the examination within 3 to 4 days after the end of her period.

If the woman has reached menopause, she can take the test during any day of the month. As for breastfeeding women, the self-examination should be done after the completion of the lactation stage.

How to do a breast self-examination?

Breast self-examination is performed through the following steps:

Stand in front of the mirror and look at the breast to notice any change in the skin of the breast, or a change in shape, or any retraction of the nipple to the inside of the breast.

In the event that an individual has factors that increase the risk of breast cancer, it is recommended that the woman discuss the benefits and harms of starting mammograms at an early age, or adding other tests such as ultrasound, magnetic resonance, or undergoing other more frequent examinations.

There are many specialized centers and programs for the early detection of breast cancer in the Arab world, such as:

Have you chosen the right clothes for the rainy weather today? The clothing recommendations service from Arabia Weather made it easy for you