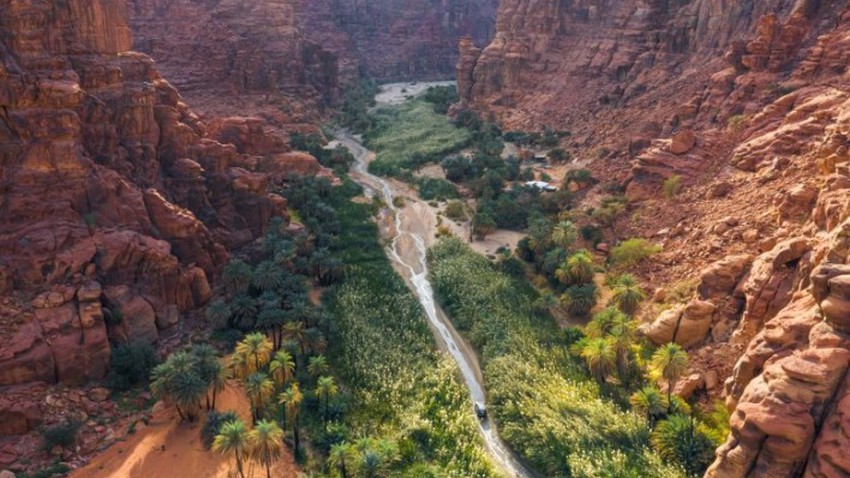 Weather of Arabia - The city of Tabuk, the capital of the Tabuk region in northwestern Saudi Arabia, has long been a resting point for Jordanian and Egyptian pilgrims. Its rich culture is evident in the Mill Market, which is famous for selling embroidered carpets and goatskin tent covers. The crowds usually flock to visit the ancient archaeological sites and the site mentioned in the story of the Prophet Musa, who lived in the east of the city for a decade.

The charming beach towns of Tabuk, such as Haql and Sharma, represent the beginning of the Saudi coast, characterized by clear waters and pristine beaches. There are also more natural terrains to explore: the carved tombs at Maghair Shuaib, the Moussa Eyes near Magna where natural springs flow beneath the palm trees, or the stunning Tayeb Asm area, a valley of steep granite rocks separating it from the Gulf of Aqaba. Turquoise road only.

The most famous tourist places in Tabuk There are many picturesque castles scattered throughout the Tabuk region, but the oldest is the majestic castle in the center of the city. It dates back to 1559, although some claim a fortress has been on the site since 3500 BC. Inside the castle, there are two mosques connected by a large courtyard, as well as stairs and watchtowers. There is also a small museum that documents the history of the fortress and the city and details about the great explorers who visited the area, such as Ibn Battuta, as well as about the caravans of pilgrims who were resting there to take water from the wells on the way to Mecca and Medina.

At the crossroads of three valleys south of Tabuk, the majestic columns carved out of sandstone by the wind stand in Wadi Al-Disah, and look like a mixture of the landmarks of the Great Rift Valley and the Monument Valley in the United States. The area is mostly desert, but canyons punctuate oases with ponds, tall grasses and palm trees providing endless photo opportunities at every turn, especially at sunset. Most of the valley can be hiked, or you can head there by 4x4. Maghair Shuaib appears out of nowhere in the red sand desert west of Tabuk. It is characterized by facades and tombs carved in sandstone, similar to the Petra region in Jordan and Al-Hijr in Al-Ula. After the Prophet Moses fled from Egypt, he lived there under the patronage of the Prophet Shuaib, who admired his magnanimity and offered him to marry his daughter Saffurah. The Prophet Musa accepted the offer and married her before returning to Egypt.