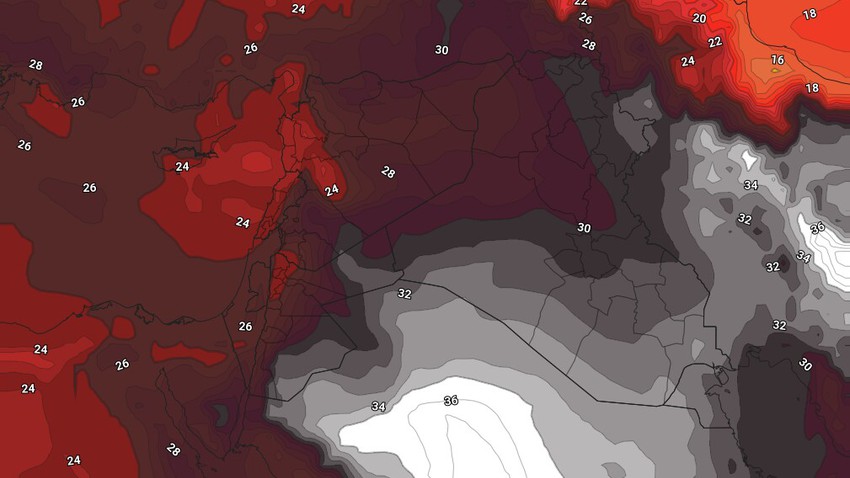 Weather of Arabia - The latest atmospheric readings of computer simulation models of the movement of air masses indicate an expected approach of the hot air mass over all regions of the Levant, starting on Thursday, so that temperatures will become higher than their monthly averages and a hotter than usual atmosphere prevails.

In the details, and according to the weather maps, the semi-tropical air altitude will remain concentrated near the northern parts of the Arabian Peninsula, which means that its influence will extend to dominate the atmosphere of the Levant, which means a rise in the temperature on Thursday and is likely to intensify at the beginning of next week, when relatively hot weather prevails. In the mountainous heights, while the weather is very hot in the low areas, and temperatures are forty in those areas, and the winds are west to northwest, moderate in speed, active in the afternoon, may work to raise the levels of dust in the atmosphere, especially desert areas. During the night hours, the weather is moderate in the mountainous heights and the plains, while it is remarkably warm in the low areas, in conjunction with the continued high levels of humidity at night, and the formation of light fog in the western mountain slopes of the Levant, and the winds are northwesterly light in speed in general.

Of course, during the summer months, the region is under a conflict and overlap between the influence of the hot masses centered on the Arabian Peninsula and the extension of the gentle heat masses rushing across the Mediterranean , and the extent of the influence of one of the blocks at the expense of the other depends on the distribution of weather systems in the northern half of the Earth.

Weather condition and expected temperatures in the capitals of the Levant on Thursday 15-07-2021: