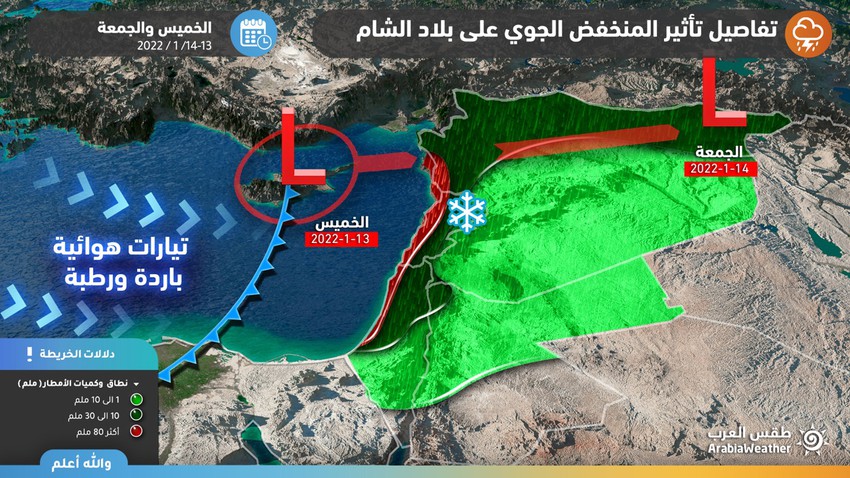 Arab Weather - Satellite images and remote sensing observatories at the Arab Regional Weather Center for Meteorology and Forecasting indicate the presence of an air depression (at the moment of preparing the report) superficially stationed to the west of the island of Cyprus and accompanied by a cold air front that began to cross the atmosphere of the Syrian coast and is expected in the coming hours To cross Palestine and Jordan alike, God willing.

The cold air front crosses the south of the Levant tonight

According to the computer simulation of the movement of this depression, it is expected that its center will move towards northwest Syria and be accompanied by a cold air front, so that rainfall will increase over large parts of western and northern Syria and Lebanon. The southern parts of them are accompanied by showers of heavy hail sometimes.

With the crossing of the same cold air front, temperatures are expected to drop and the weather turns to become remarkably cold, and snow showers are likely at night hours over the peaks of Syria and Lebanon, which are more than 1,600 meters, extending with dawn hours to below, so that the peaks of the Shara Mountains will witness In the south of the Kingdom, some light snow showers, and low clouds touching the surface of the earth cross the high mountainous altitudes, causing fog to form.

The air depression moved towards Iraq on Friday, and the impact of the very cold air mass increased

The depression is moving towards northern Iraq, in complete contrast, the influence of the extremely cold and rushing air mass from eastern Europe is increasing and will remain in the region for several days, God willing. The weather is cold and often cloudy with rain, God willing, at intervals in several parts of the Levant, especially the coastal and southern parts of it, including Jordan and Palestine.

Also, the depression is completely away from the country’s atmosphere at night, but the effects of the effects of this mass will be significantly evident in the night hours, as the weather at night is very cold in several areas, and it is very cold in the mountain peaks so that the minimum temperatures there drop to below zero Celsius, as well. Snow showers are not excluded over the high mountain peaks, including the Shara Mountains in southern Jordan.