Levant | Full details about the expected depression and snow and rain forecasts, as of Monday 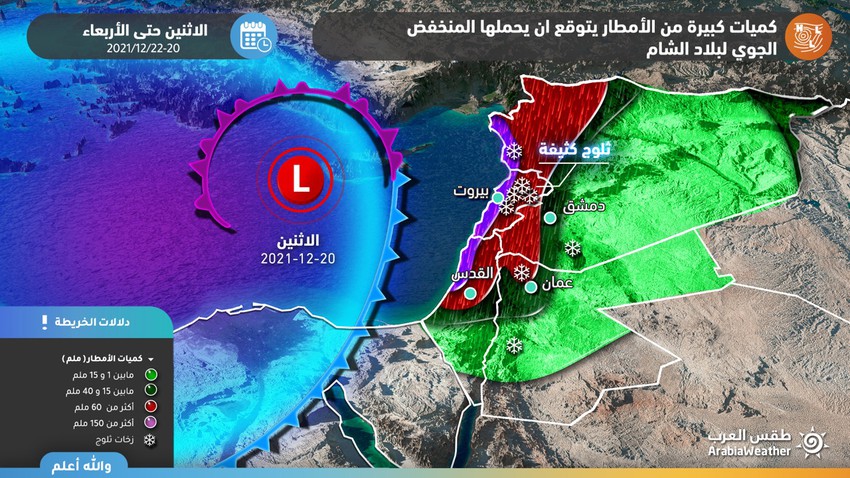 Arab weather - The latest weather readings of computer simulation models of the movement of air masses in the European continent and the Levant indicate that after the temporary stability on the weather today, Sunday, it is expected that the Levant will be affected by an air depression, with the daytime hours on Monday, God willing.

An air rise rushes towards the European continent, attached to a warm air mass coming from Africa, so that the rise simplifies its control over large parts of the west and southwest of the European continent, and the temperatures there rise significantly, and this coincides with the rush of a polar and very cold air mass that pushes the rise to fall to the east and southeast Europe and the Balkan Basin, and as a result, an air depression is formed in the eastern region of the Mediterranean Sea, accompanied by a very cold air mass in all layers of the atmosphere, affecting the Levant in the form of two fronts:

Regarding the details, there will be a sharp drop in temperatures on Monday and become much lower than their usual rates for this time of the year, and the weather is generally cold in most areas, and even very cold over the high mountainous heights, and rain falls along the coastal strip of the Levant with hours On Monday morning, it extends to the interior of the Levant with the hours before noon to include chances of rain in several parts of Palestine, Jordan, Lebanon and western Syria. The rains are random and accompanied by hail, God willing. 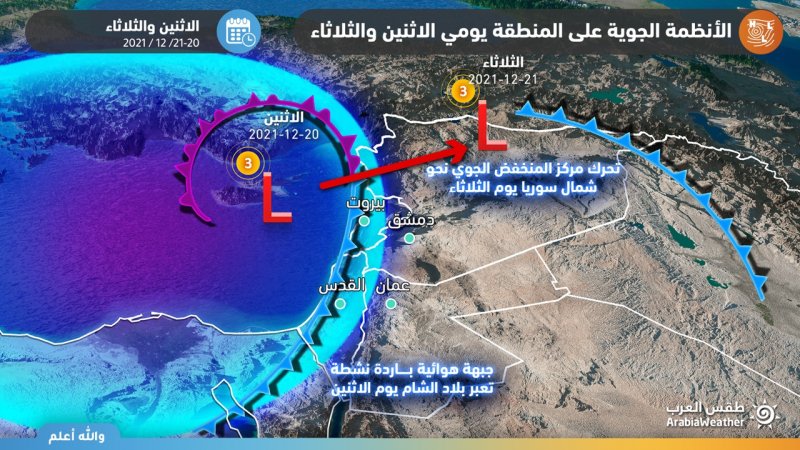 It is also expected that showers of snow will fall over the high mountainous heights of more than 1,100 meters above sea level in Palestine and Jordan, and sometimes accumulate over areas above 1,300 meters above sea level, which include parts of the Sharah Mountains in the governorates of Tafileh and Maan. Lebanon’s peaks, which exceed 1,400 meters, are heavy and accumulated snow, while brisk southwesterly winds blow over the Levant, with strong gusts sometimes reaching nearly 100 km/hour, causing dust waves, especially in desert areas and to a lesser extent in the rest of the regions. It reduces the range of horizontal vision.

Second: Crossing the most severe section of the air depression on Monday afternoon and evening

The chances of precipitation decrease temporarily in the afternoon and are intermittent, in preparation for the crossing of a new air front later, so that dusty, stormy and very cold weather prevails in this period with strong winds, and as of Monday afternoon and evening, the effect of the depression deepens, which will be superficially centered at the time in northwest Syria. The air is very cold, as a new air front is expected to cross the atmosphere of the Levant, so the weather will become stormy, cloudy and rainy, God willing, and the rain will be heavy and accompanied by hail showers in several parts of Palestine, Jordan, Lebanon and western Syria, while it is less severe in the rest of the Syrian regions. . 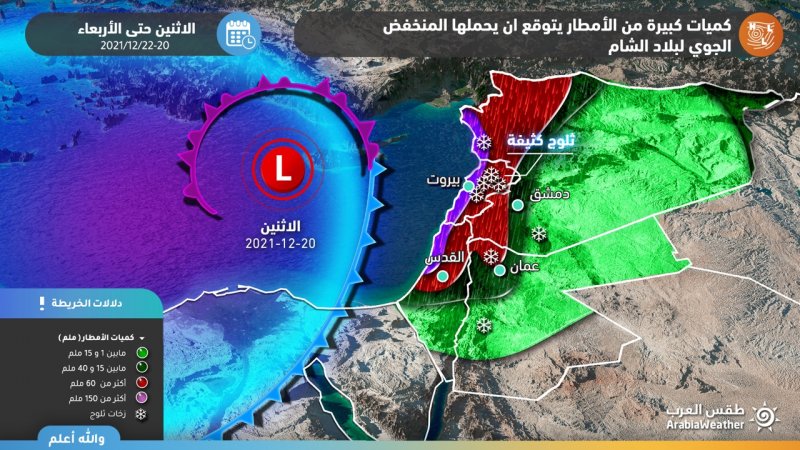 Third: Wet western currents and the remnants of the cold air mass from Tuesday until the end of the week

The depression is moving towards the east, away from the Kingdom, and is centered on Tuesday to the north-east of Iraq, and the Levant remains under the influence of humid western currents and the remnants of the cold air mass, so that the weather will continue to be cold and often cloudy, while the opportunity remains prepared for showers of rain, God willing, at intervals, which are heavy. Sometimes in northern Jordan and Palestine, all of Lebanon and western Syria, with expectations that the humid western currents will continue to rush until the end of the week.

It is expected that the depression will bring large amounts of rain, which will contribute to raising the rain stock and contribute to the agricultural sector and improve soil moisture, God willing.

Fourth: Recommendations from Arab weather during the depression period: