Arab weather - It is expected that the weather will continue to be normal in the summer in most areas throughout the current week, so that the temperatures are around their rates for this time of the year with an increase in humidity, especially at night.

On Wednesday, the weather will be normal summer and generally sunny during the day, with temperatures in the range of 28-30 degrees Celsius in the mountainous heights, so that they are around their rates for this time of the year, and the winds will be west to northwest, moderate in speed, active in the afternoon may work on Raising dust in some areas, especially the Syrian and Jordanian Badia. 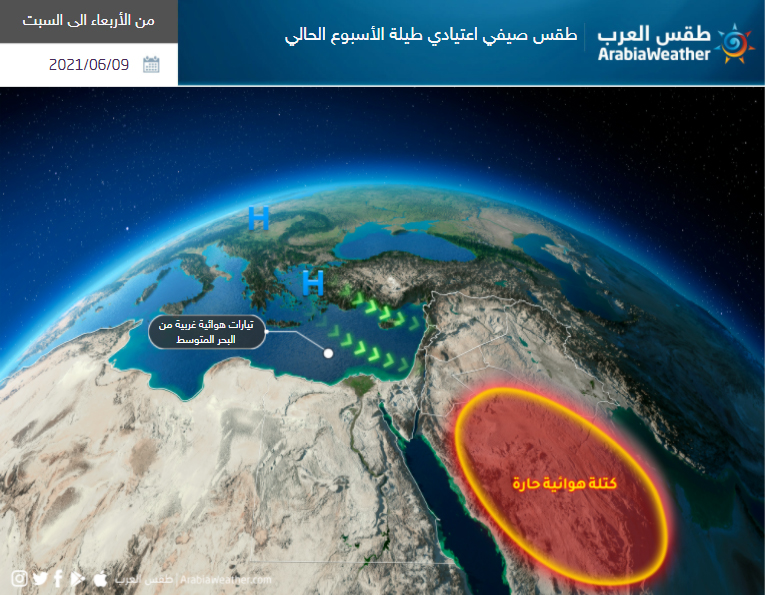 During the night hours, the weather is pleasant in all regions, while it tends to get a little cold over the high mountains and plains with the late night hours, and humidity levels rise and light fog forms in parts of the western mountain slopes of Palestine and Syria.

It is expected that there will be no significant change in temperatures during the coming period, so that the normal summer weather and temperatures around their annual rates are prevailing throughout the region, and this atmosphere comes as a result of the rush of cold air masses east of the European continent and accompanied by an extension of low air in the upper layers of the atmosphere, while An atmospheric high is dominant in the center of the European continent, which contributes to the rush of sea currents with normal temperatures towards the whole of the Levant region.

Weather condition and expected temperatures in the capitals of the Levant on Wednesday 9-06-2021:

The weather in Jerusalem

Where are you? (protected shelter)