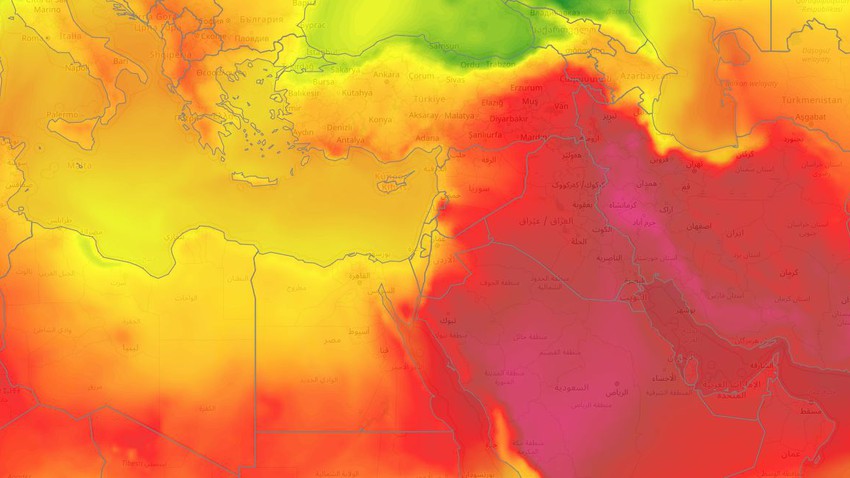 Arab weather - the latest treated weather updates indicate an expected continuation of moist marine air currents with natural temperatures towards all regions of the Levant, so that normal summer weather tends to heat during the noon and afternoon hours, without any expectations of a rush of heat waves over the region during the coming days, This weather is suitable for outdoor sessions and excursions.

In the details, the temperatures are around their rates for this time of the year, and the weather is relatively hot in the coasts and mountainous heights with temperatures in the early thirties in most areas, while the weather is hot in the Badia regions, and very hot in the low areas, and it blows Westerly to northwesterly moderate winds, active in the afternoon hours and raising dust and dust in parts of Syria and Transjordan.

During the night hours, the weather is generally moderate in the mountainous areas and the plains, while the weather is warm in the low areas, and humidity levels rise and fog forms in parts of the western mountain slopes of Palestine, Syria, southern Lebanon and northern Jordan.

With the continued control of an air mass with temperatures around their normal rates, the weather is suitable for going out on trips and practicing outdoor activities with the afternoon hours, especially in mountainous and coastal areas , taking into account avoiding direct exposure to sunlight directly for a long time and drinking a lot of fluids.

Weather condition and expected temperatures in the capitals of the Levant on Tuesday 27-07-2021: