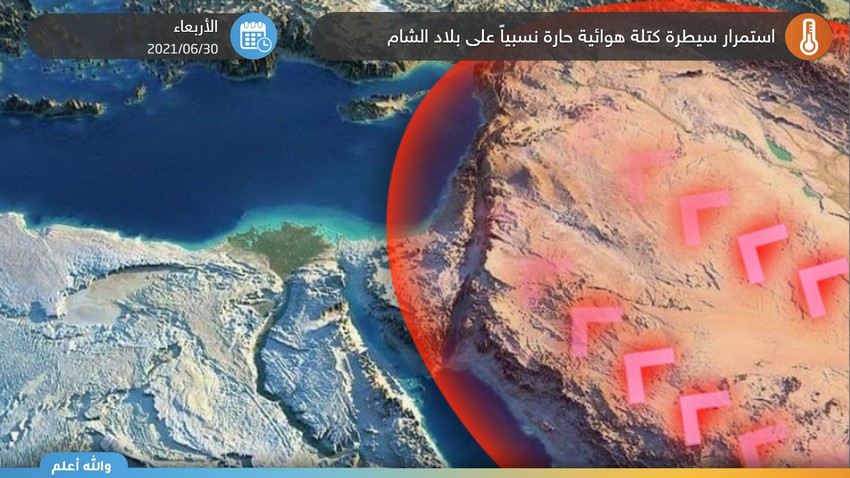 Arab weather - The current month of June, which is about to end, was characterized by the usual summer weather, and even temperatures dropped on many days, accompanied by the activity of the western winds and some low humid clouds, which added coldness to the atmosphere during the night hours. As the cold air masses began to rush from the eastern Atlantic regions to the north and central European continent, which pushes the hot air masses towards the lower widths, including the Levant and North Africa in response.

A relatively hot air mass continues to dominate the area

The latest forecasts issued by the weather forecast staff indicate an expected continuation of the air mass over the relatively hot region, so that the temperature will be in the range of 32-35 degrees Celsius in the mountainous heights, to be higher than its rates for this time of the year, while the weather is very hot. In the low areas and the eastern Badia, the winds are northwesterly to northwesterly moderate, active in the afternoon to raise dust and dust in the atmosphere in the interior regions of the eastern Badia. 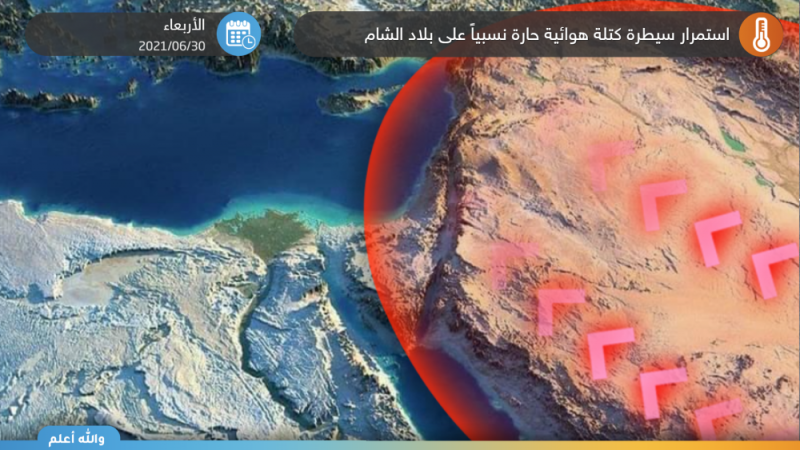 As for the night hours, the weather is moderate in the mountainous heights and the plains, while it is remarkably warm in the low areas, in conjunction with the continued high levels of humidity at night, and this high humidity will increase the sense of heat further.

In light of this atmosphere, Arab weather recommends in such circumstances wearing hats and sunglasses and wearing light and loose clothes, and also recommends drinking large amounts of fluids and not relying on a sense of thirst for drinking.

Mass does not rise to the name of a heat wave!

Despite expectations of a rise in temperatures in the coming days, it is not expected, according to current estimates, to rise to what is scientifically called a “heat wave, as expectations indicate that temperatures do not exceed their normal rates by much , it is worth noting that the term heat wave is used when the temperature exceeds its general rates At five degrees Celsius or more, for at least three consecutive days and over a wide geographical area.

Weather condition and expected temperatures in the capitals of the Levant on Wednesday 30-06-2021:

Jordan | Mild autumn weather and temperatures in the twenty-first century in the capital, Amman, on Monday