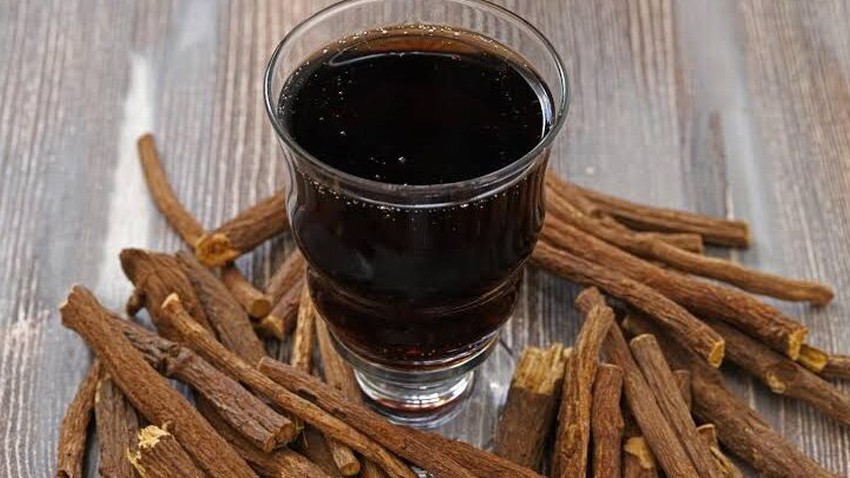 The fasting person suffers from a great loss of fluids, especially when the blessed month of Ramadan coincides with the summer, when the high temperatures combine with the long fasting hours, which leads the fasting people to adopt a number of drinks that moisturize the body and feel refreshed.

Licorice syrup is a black colored syrup that is both sweet and bitter, and is made from the root of the licorice plant. Licorice syrup is considered a traditional drink in many countries, especially in Egypt and Syria, and it is frequently consumed during the holy month of Ramadan.

The root of the licorice plant is used in several areas, including the juice industry and the manufacture of sweets, and the areas of its use expand to include medicinal uses, due to its many positive effects on human health.

Benefits of licorice in Ramadan

The secret behind the benefits of licorice during Ramadan is its rich content of important nutrients, as licorice syrup contains many vitamins important to human health, such as vitamin B1, vitamin B2 and vitamin B3. In addition to its high concentration of minerals, such as sodium, potassium, and calcium.

Licorice syrup got its popularity by many peoples since a long time ago because of its benefits. Here are some of the benefits of licorice during Ramadan:

One of the most common problems that fasting people face is dehydration, due to the long fasting hours, which are accompanied by high temperatures in some countries, so moisturizing the body is one of the first benefits of licorice in Ramadan, which can be eaten at breakfast and during breakfast hours allowed to make up for lost fluids during the day. .

Relief from heartburn and indigestion

Many fasting people suffer from heartburn and stomach upset, as a result of the sudden change in eating habits and times during Ramadan. Among the most important benefits of licorice in Ramadan is the relief and reduction of heartburn, as licorice drink contains glycyrrhizic acid, which has anti-inflammatory properties, raises the level of the body's immunity, and works to accelerate the repair of the stomach lining and rebalance it.

In another study published in 2017 in the Australian Journal of Folk Medicine, and conducted on 58 patients with GERD, the results indicated that consuming licorice root on a daily basis helps relieve symptoms of GERD more effectively than using antacid drugs.

Among the benefits of licorice in Ramadan also is that it helps reduce indigestion. In a study conducted in 2012 and published in the Journal of Alternative Medicine, 50 volunteers of adults suffering from indigestion took 75 mg of a capsule of licorice, for a period of 30 days, as the results showed improvement. Symptoms are more severe in these patients compared to others.

Among the benefits of licorice in Ramadan is that it also contributes to the treatment of peptic ulcers, including those of the esophagus, stomach, and small intestine, which usually occur as a result of infection with H. pylori, whether it occurred during Ramadan or before the beginning of the month.

The importance of licorice is due to its high content of glyceric acid, which in turn inhibits the activity of the bacteria that cause ulcers and prevents their growth in the stomach.

In a study published in 2016 in the Brazilian Journal of Infectious Diseases, 120 adults with ulcers consumed licorice extract for two weeks, which significantly reduced H.pylori infection.

One of the benefits of licorice in Ramadan is that it helps to reduce stress and anxiety that may afflict some fasting people during the month, as licorice helps to raise the concentration of the hormone cortisol in the blood, which in turn resists feelings of anxiety or tension.

Helping to lose weight during Ramadan

Despite the lack of studies on the benefits of licorice in Ramadan for weight loss, some scholars believe that licorice helps to lose weight by half a kilogram, which can be used with the principle of fasting in the month of Ramadan, and with a healthy diet in Ramadan to lose excess kilograms.

Damage to licorice in Ramadan

Moderate doses of licorice are considered very safe to use, and despite the benefits of licorice in Ramadan, excessive intake of licorice during Ramadan causes many side effects.

Among the disadvantages of excessive drinking licorice during Ramadan:

It is advised to avoid drinking licorice during Ramadan for the following groups:

Moreover, licorice interacts with a large number of drugs, so it is advisable to consult a doctor or pharmacist before drinking licorice during Ramadan.

How to prepare licorice syrup in Ramadan

To get the full benefits of licorice in Ramadan, it can be eaten at breakfast from day to day, as licorice syrup is prepared by using crushed licorice or ready-made licorice powder, in the following way:

Some people may ask, does the smell of licorice break the fast?

According to jurisprudential encyclopedias, fasting is not invalidated unless something deliberately enters the human stomach.

Jordanian Health: 599 injuries and 10 new deaths from the Corona epidemic - may God have mercy on them all

Video | A massive fire breaks out in Al-Masqi Park, and the Civil Defense is rushing to the place