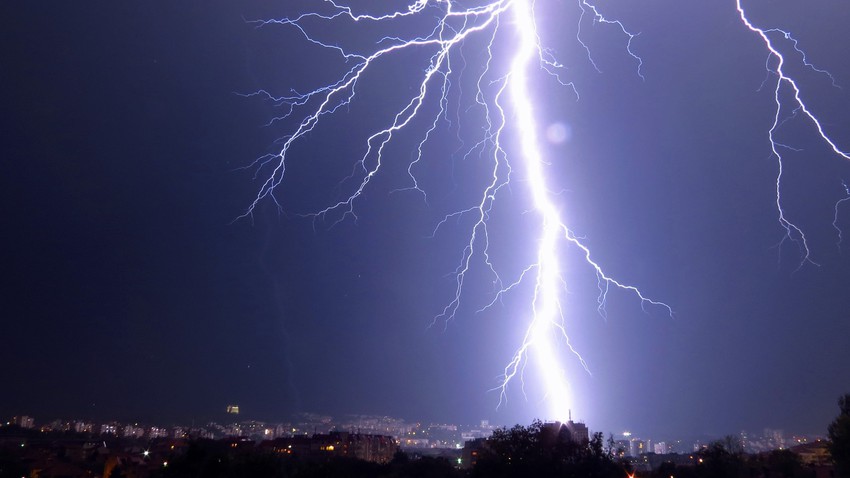 Weather of Arabia - The Bulgarian Ministry of Interior said, on Tuesday, that three people died after a lightning strike struck a small park in the center of the capital, Sofia.

"Another man was taken to hospital in critical condition, during a thunderstorm and heavy rain late on Tuesday evening," she added.

Medical officials told Reuters that the man who was taken to hospital has 20% burns and is of Syrian origin. Local media reported that the three victims were also Syrians, but an Interior Ministry spokesman said the victims had not yet been identified.

And Agence France-Presse reported, on Tuesday, that "a lightning strike killed three Syrians who took shelter under a tree in the center of the Bulgarian capital Sofia, according to local media, quoting a spokeswoman for the emergency service."

The spokeswoman confirmed that a fourth Syrian who was with them was taken to hospital in a critical condition, adding that the victims "are between 20 and 30 years old."

And public radio "BNR" reported that another man was struck by lightning in a public park in the west of the capital.

About 800 bolts of lightning struck Sofia in less than an hour, according to the Meteorological Service.

The storm, accompanied by hail, caused a power outage, while the floods inundated basements and underground passages.

WATCH: As a result of the severe storm with hail and lightning that broke out in the capital and killed three people, power has been cut off to several neighborhoods and villages in and around #Sofia . #Environment . pic.twitter.com/jO7FqSkXUf

Read also: The dangers of lightning strikes..and ways to protect from them