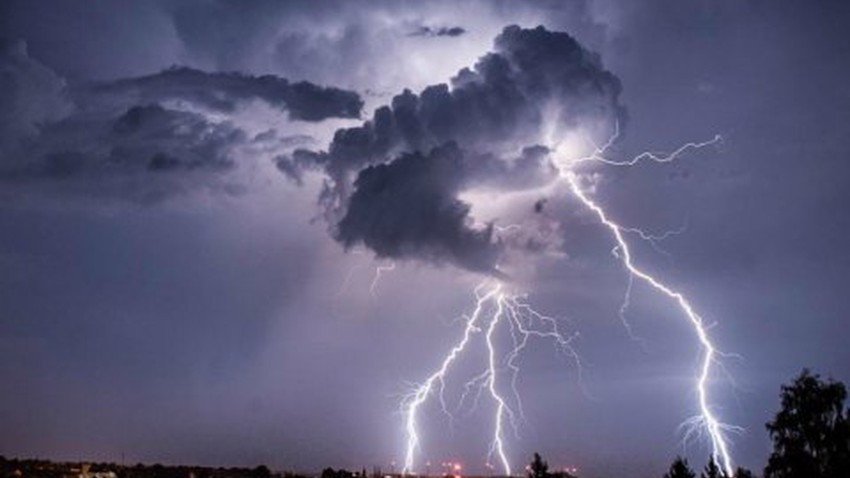 Arab weather - lightning is a natural phenomenon that occurs when there is an imbalance in the charges between the thunderstorms and the surface of the earth or within the clouds themselves, and an electrical discharge occurs between them that appears in the form of a flash of lightning, and when the lightning penetrates the air, it causes it to heat up and expand suddenly and quickly, resulting in a sound A strong crackle we hear shortly after seeing a flash of lightning, and this sound is thunder.

Lightning may strike anything on the surface of the earth, and thus the person becomes exposed to the danger of being struck by lightning, and there are several ways in which the lightning can strike a person, and some types of strikes may be fatal, so immediate medical attention is important to keep the person alive until medical care arrives. Specialized.

The ways in which lightning strikes its human victims

Direct strikes are less common than other ways in which lightning strikes people, but they are likely to be the most deadly.Direct strikes happen most often to people who are in open areas, so that the person becomes part of the main lightning discharge channel, and in most direct strikes, they move Part of the current is along the surface of the skin and directly above it in the form of a strong electrical flash ( flashover ). The heat from the movement of lightning over the skin can then cause burns, and part of the current moves through the body - usually through the cardiovascular system and / or device Nervous, and this current passing through the body poses a great danger, and the likelihood of surviving any lightning strike depends on immediate medical care, as well as on the amount of current that moves through the body.

Side incidence of a flash (Side Flash)

Side flashes generally occur when a person is within a foot or two of the object that is struck by lightning, such as if a person turns to a tree to avoid rain or hail, and if lightning strikes that tree, part of the stream may jump from the tree to hit the nearby person, so that this person works As a short circuit , to drain some of the lightning energy.

The lightning current can be transmitted over long distances in wires or other metal surfaces. Metallic materials provide a path for the lightning current (and do not attract lightning as it is believed). Most lightning injuries that occur inside homes are caused by conduction, as a person touches objects connected to metal wires, plumbing pipes or surfaces. Metal extending out could endanger it, and this includes anything plugged into an electrical outlet, water faucets, wired phones, windows and doors.

How can I recognize the presence of a nearby electrical discharge?

There is no reliable way to predict the strike of a lightning bolt, but there are indicators that can be inferred from the signs of electric charge accumulation, such as:

If any of these signs are observed at the time of thunderstorms, it is advisable to stay away from potential sources of lightning current transmission, and not to touch conductive materials.

In the event that there are lightning strikes near you, take the position of protection from lightning, which is to bring the distance between your feet and sit cross-legged, and bend your head and place it between your knees, while avoiding touching the ground and trying to reduce the points of contact of the body with the ground as much as possible, and it is forbidden to lie on the ground because that It increases the surface area of the body in contact with the ground, and bending down reduces the possibility of exposure to direct strikes from lightning, and bending the head down keeps it from being the highest point so that it is the part exposed to the blow, and it is advisable to close the ears to protect them from damage caused by the sound of thunder. Ways to avoid the dangers of a lightning bolt

1. When planning an outdoor activity, you must first check the weather forecast, and set up an emergency plan in the event of a thunderstorm, such as ensuring that there is a solid building nearby that can be entered, or that there is access to the car and shelter inside it, and you must avoid being on boats when there are A reasonable chance of a thunderstorm, and if a thunderstorm occurs while in the boat, be in an indoor area and avoid touching any metal parts.

2. If trees are the only option for shelter, then they must be bent over in a low, uncovered area.

3. Stay in the car if necessary, while avoiding touching any metal surface. If the lightning bolt strikes the car, the metal frame works to direct the lightning bolt around the body and to the ground, but the hands, feet and body must be kept away from any metal surfaces while inside the car It is worth noting that convertibles do not provide this protection, even with the top cover made of cloth.

Video | A shocking surprise .. Dr. Nizar Bahbri confirms the uselessness of cough medicines and antibiotics in treating and relieving influenza symptoms, and advises water and honey