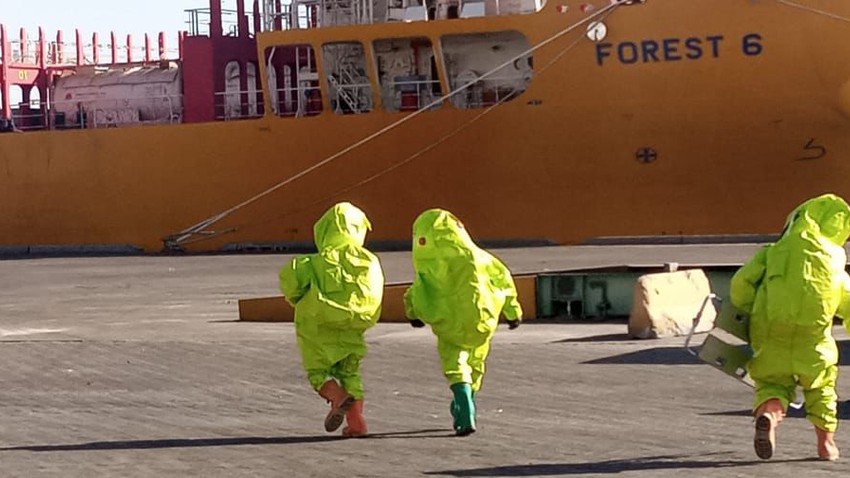 Arab weather - 13 people died and more than 260 others were injured as a result of the leakage of toxic gas from a tank in the port of Aqaba in Jordan, after the gas tank fell on the edge of the ship, causing gas to escape from it and causing deaths, suffocation and burns.

The southern beach in the Aqaba governorate was evacuated on Monday, after toxic gas leaked from a tank, according to the "Kingdom" correspondent.

She explained that the ship in which the leak occurred had dropped a tank containing toxic gases.

She pointed out that the location of the poison gas leakage is far from residential areas, explaining that the cause of the gas leak is still unknown.

And it indicated that the injuries were transferred to Prince Hashem Military Hospital in the city of Player, the Islamic Hospital, and another third private hospital, in addition to the opening of the field hospital located near Prince Hashem Hospital.

She stated that the industrial area is located in the southern region of the city of Aqaba, and the southern beaches are close to this area by a distance.

The governor of Aqaba, Muhammad Al-Rafa'a, told Al-Mamlaka that the accident was brought under control.

Injured people were taken to hospital after a toxic gas leaked from a tank after it fell, according to the Public Security Directorate.

A spokesman for the Public Security Directorate, Amer Al-Sartawi, said on Monday, "During the daily work in the port of Aqaba, an accident occurred when a tanker filled with a toxic gaseous substance fell during its transportation, which led to a gas leakage at the site."

Al-Sartawi added, "The area was immediately isolated and specialists began to deal with the incident, while the Civil Defense transferred a number of injuries to the hospital, and they are all under treatment."