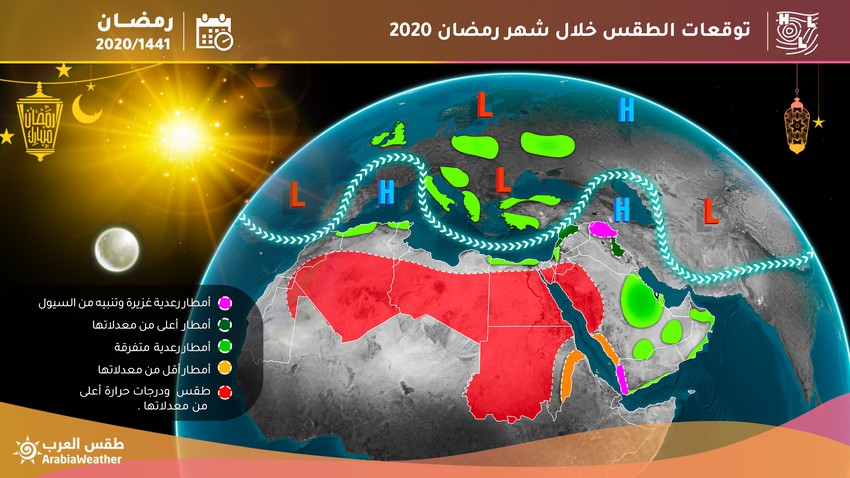 An upper elevation controls parts of southern and western European continent, which helps to push cold and humid air masses towards the west of the medium, which works to reduce temperatures and increase the chances of rain and the formation of torrential rain, especially on the north of Morocco and northwestern Algeria. Algeria, as well as fifty-year depressions are active in eastern Libya, accompanied by dusty dust and winds.

A strong upper elevation dominates the center of the European continent while cold air masses continue to rush towards the western Mediterranean and middle periods, which helps in occasional heavy showers of rain, especially in northern Morocco, northern Algeria and Tunisia, and temperatures remain below their rates in these regions, with surface wind activity on parts From eastern Algeria and central and eastern Libya.

Strong upper elevation controls parts of eastern European continent that works to retreat with cold and humid air masses on the western Mediterranean in favor of the central and eastern Mediterranean, which works on high temperatures with remaining around less than the average in most regions and increasing opportunities for rain in northern Libya with activity for surface winds in particular In the local areas of Libya.

Cold and humid air masses retreat with a high orbital extension towards the western Mediterranean, which increases temperature and keeps around their rates in the western Mediterranean while they are higher than their rates especially on Libya and rain opportunities decline to be about higher than their rates on parts of northern Algeria and Morocco with opportunities for activity of depressions Thermal accompanied by the excited soil.