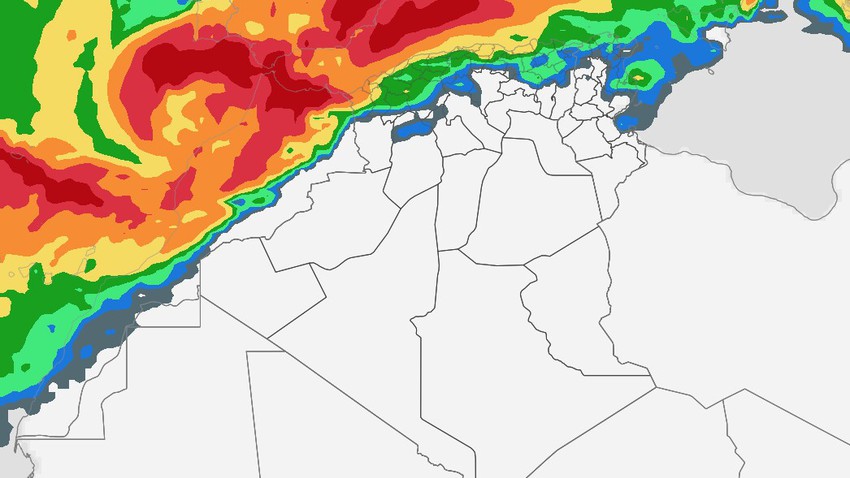 Arab Weather - The latest weather data received from the "Arab Weather" Regional Center for Meteorology and Weather Forecasts indicates that an Atlantic depression will affect Morocco on Monday 4-4-2022, accompanied by a cold and humid air mass, and the impact of weather disturbances affects parts of northern Algeria, God willing.

It is expected, God willing, that the impact of this air depression will begin with Qajar hours and Monday morning, so that rain falls in the coastal areas, intensifies during the day and extends to include most of the northern regions of the Kingdom, and becomes heavy in some parts, especially coastal ones, and is sometimes accompanied by lightning and thunder, and precipitation. Showers in some areas. The temperatures will decrease, God willing, in most regions, and the weather will be cold in most of the northern regions and very cold over the Atlas Mountains, with snow showers expected during the daytime hours on Monday.

The effects of the depression will continue on Morocco on Tuesday, April 5, 2022, as rain is expected to continue in many areas of the north of the Kingdom, heavy at intervals that may be interspersed with some thunder and concentrated in coastal areas, and the chance of rain remains until Wednesday night, but a rapid decline will occur Then, after the depression moves to the east, away from the Kingdom.

It is expected that the chances of sporadic showers of rain will include parts of northern Algeria on Wednesday and Thursday, April 6 and 7, 2022, with the chances of rain concentrating on the coastal areas, and these rains are mostly scattered, and the cold air mass in Algeria's atmosphere deepens on Thursday, causing a remarkable decrease in Temperatures in large parts of it, God willing.