Memory of the snowstorm Hoda 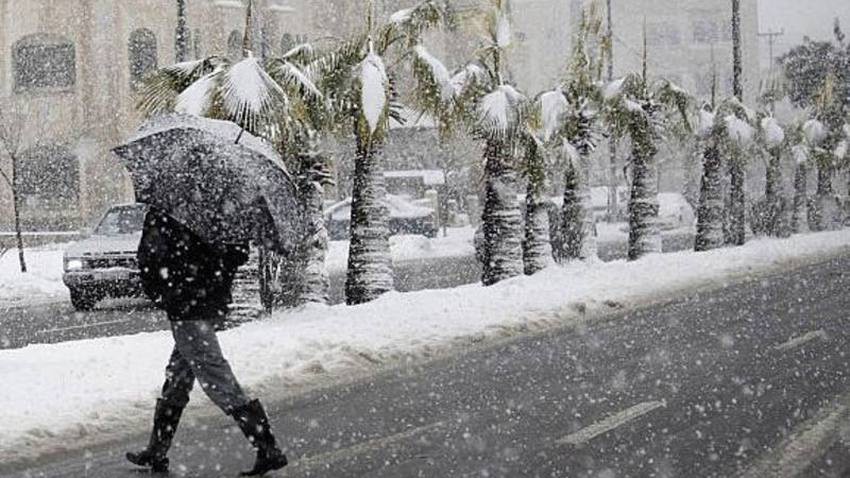 Arab Weather - Jordanians remember on this day every year the snow scene that covered many regions of the Kingdom, as today coincides with the sixth anniversary of the snow storm Hoda, which began to affect the Kingdom on Wednesday 7-1-2015 AD, and the snowstorm Hoda caused the closure of Roads, ministries and government departments were suspended for several days, and the accumulation of snow led to the closure of the main road leading to Queen Alia International Airport in the capital, Amman, and snow completely closed the northern Amman area, and all roads were closed in the Balqa governorate northwest of the capital, as was the case in most Cities in the south of the kingdom.

The reason for the occurrence of the snow storm "Huda"

The flow of cold air from northern and central Europe towards the eastern Mediterranean, resulting in the formation of an air depression over Greece, this depression deepened on the next day and moved towards the east and became concentrated between the island of Cyprus and the Greek island of Crete, and in the meantime the Kingdom was affected by the warm air front and an event occurred A slight rise in temperatures, and the weather on Monday was from sunny to partly cloudy.

However, with the continued flow of cold air towards the east, the depression deepened and the north of the island of Cyprus was concentrated with less air pressure values than it was, and thus the air front associated with this depression approached towards the Kingdom, so the air turned on Tuesday to be stormy with the intensity of the dust-causing winds.

Then the kingdom began to be affected by the snowstorm associated with a very cold and humid polar air mass coming from Europe, and the kingdom has witnessed since Tuesday evening a state of air instability and strong winds, and snow began hours ago at dawn on Wednesday on the mountain heights, followed by a record wave of ice the next afternoon.

The weather that accompanied the storm Hoda

The Kingdom was affected on Wednesday by stormy weather due to strong winds, which reached more than 100 km / hour, and resulted in dust and dust and some sandstorms, and heavy rains fell accompanied by thunderstorms and hailstorms expected in some regions of the Kingdom, and with the hours of dawn it has already begun to fall Snow is heavy, and it began to accumulate on mountain heights that are more than 700 meters above sea level, especially in the north of the Kingdom, then snowfall and accumulation included the central regions, which rise 600 meters above sea level, and at night, freezing weather prevailed and temperatures decreased significantly until It reached zero and below zero percent in many areas,

Cold weather prevailed with a significant drop in temperatures, and strong winds that exceeded 80 km / hr continued in most regions, and the Kingdom remained affected by snowfall, but in the form of showers over mountain heights that are more than 850 meters above sea level, and snow continued. Sometimes abundantly in the Sharah Mountains, and at night snowfall renewed over most of the elevations that are more than 600 meters high.

The flow of very cold polar winds from Turkey to the region increased, and freezing weather prevailed in most regions, and temperatures decreased unusually at night, dropping from (-5) degrees Celsius in Amman and Jordanian cities, and snowfall renewed in many areas.

Jordan | Temperatures above average on the first day of August

Jordanian Health: 562 injuries and 12 new deaths from the Corona epidemic - may God have mercy on them all