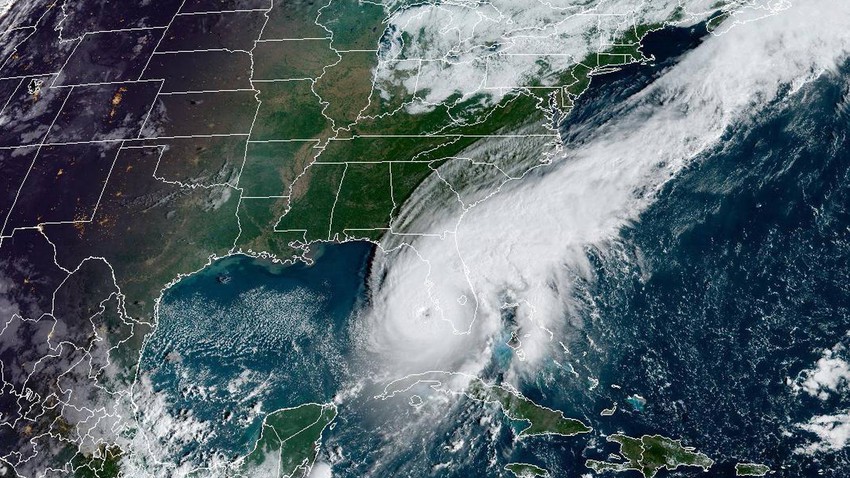 Weather of Arabia - Ian arrived at the coasts of southwest Florida on September 28 as a fourth-degree hurricane, and its classification gradually decreased as it entered land until it reached a tropical storm, after which it intensified into a category one hurricane as it advanced north on the Atlantic coasts to the states of North and South Carolina. .

But Hurricane Ian was not an ordinary hurricane, as its accompanying wind speed qualified it to be the fifth strongest hurricane to reach the mainland United States. Here are other surprising facts revealed by meteorologists at The Weather Channel.

He almost reached Class 5 an hour before making landfall

But considering wind speeds, it's still the fifth most powerful hurricane to hit the mainland United States, according to scientist Phil Klotzbadge of Colorado State University.

It made landfall at the same location as Hurricane Charlie

In a strange coincidence, Ian made landfall at Cayo Costa in Florida, a barrier island west of Fort Myers, exactly the same location as Hurricane Charlie made landfall in August 2004.

The strangest thing is that Hurricane Ian also equaled the wind speed when it reached land with the wind speed of Hurricane Charlie, which amounted to 194 km per hour. Atmospheric pressure was only 1 millibar lower than Charlie's when he made landfall in the middle of the afternoon.

Ian outperformed Charlie by being much larger and moving more slowly than Charlie, resulting in more rain, higher waves and longer winds.

There was a sustained wind of 115 miles per hour (the average wind over one minute) measured at a special weather station in Port Charlotte.

Daytona Beach recorded winds above 60 mph for more than 12 continuous hours from early morning to early afternoon on September 29.

Because Ian's center made landfall south of Tampa Bay, winds on the north side of its circulation pushed the water out of Tampa Bay, known as a blowout tide. On Wednesday afternoon, water levels were about 2 feet lower than the tide. Ordinary depression in Port Manatee, near the mouth of Tampa Bay. Something similar happened in Tampa Bay during Hurricane Irma in 2017.

Ian brought about 300 millimeters of rain on the Florida peninsula, with rainfall rates of up to 70 millimeters per hour. Which led to the flooding of rivers in an unprecedented way.

Perhaps the most surprising aspect of Florida's river floods, is that Orlando broke its own record for 24-hour rainfall, receiving 317 millimeters (12.49 in) from 8 a.m. Wednesday through 8 a.m. Thursday. That's twice the amount of rain in September that fell in 24 hours. This resulted in widespread flooding in the metro area.

Extensive flooding in our area remains a serious situation for Kissimmee residents. Shelter in place as first responders continue rescue operations. If you have an emergency, call 9-1-1. pic.twitter.com/RGn0HWzCj0

Flooding in St. Augustine, northeast Florida, was similar to levels seen there during Hurricane Matthew in 2016, according to local rescue teams and broadcast media.

Serious flooding here in St. | Augustine due to #HurricanIan and almost an hour until high tide. We are pretty much trapped at our hotel. @FCN2go @WGRZ pic.twitter.com/ReI42zkI2l

More: Hurricane "Ian": continued its attack from Cuba to America... causing widespread destruction and dozens of deaths in Florida and South Carolina