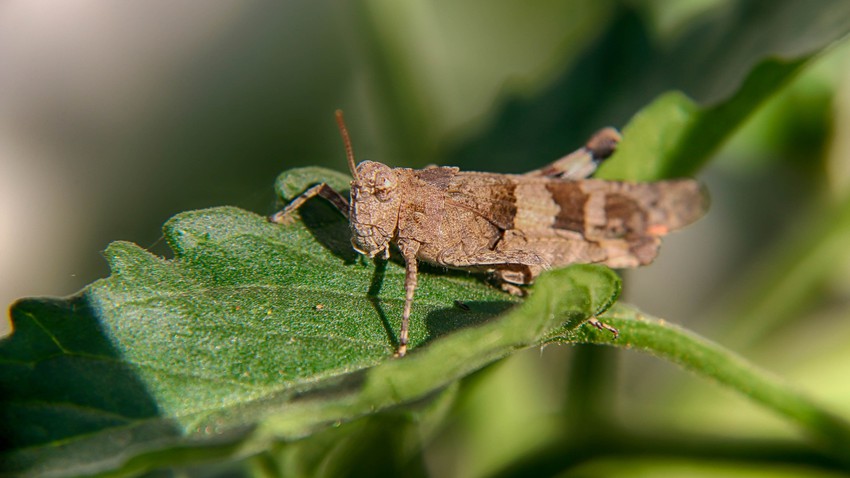 Arab Weather - The Jordanian Ministry of Agriculture issued today, Monday, 4/26/2021, the daily report on the state of desert locusts in the Kingdom, and accordingly the report stated

The Ministry of Agriculture affirms that the danger phase has been overcome for days, with great efforts made during the past weeks by the cadres of the Ministry of Agriculture in most governorates and the great support by the armed forces / air force, public security, administrative governors, the Aqaba Economic Commission, the Amman Municipality, municipalities, media, the private sector and farmers.
As the daily exploration teams reached 60 exploration teams and more than 50 combat teams in addition to the aircraft.
The control efforts in one day reached more than 40 thousand dunums, and the results reached more than 95% in addition to that no damage was recorded in crops more than 5%. Hence, the Ministry will work to stop the daily report due to the decrease in the risk and the disappearance of the presence of locusts from most governorates. We hope to return to issuing the daily statement, except in the event of the return of the danger from the locusts, God forbid, as the news will be approved by the media according to the control area.
All announced numbers will remain open to receive communications and information from all governorates of the Kingdom and to follow-up and monitor information.

The Ministry of Agriculture calls upon the citizens to make sure of the information and watch before reporting the ministry’s numbers because there are a number of inaccurate reports and these affect the work of the exploration teams and the dispersion of efforts.

The Ministry affirms that all the information received is monitored and coordinated according to the action plan, and the Ministry can monitor the behavior and movement of locusts and estimate places of movement. Therefore, the information is processed in a place that may be far from the place that was reported after tracking the locust path. We also confirm that we do not carry out control operations inside residential areas. Or close to animals, and we carry out expulsion operations through the condensed smoke mixed with public health pesticides to expel the locusts outside residential areas and then fight in order to preserve the health of citizens.

Today's wind movement indicates that it will be southwesterly active during the day, which maintains an average possibility for locusts to enter during the day, and the dust waves will help reduce the internal movement of locusts in some areas.

The Ministry of Agriculture calls upon the brothers farmers to adhere to the safety period for agricultural pesticides used in combating desert locusts, which is three weeks from the date of spraying, in order to ensure that there are no residues of pesticides in their crops upon harvest. The Ministry also affirms that the brothers livestock keepers to stay away from the sites and spraying for the same period in order to preserve their animals from Any effect of the pesticides used, noting that the Ministry, through its specialized cadres, takes samples from the crops prepared for marketing to ensure that there are no pesticide residues.

The sprinklers loaded on tractors and also those loaded on cars were used, as well as the use of sprinklers carried by individuals in rugged areas and valleys. It is reported that locusts are of the mature type in the stage of mating and migration and do not pose any danger to the crops, and all control measures have been taken outside cities and residential areas.

The contingency plan will remain until mid-June 6/2021, and the risk of desert locust entry is reduced, God willing.

The Ministry affirms the readiness and readiness to deal with this scourge through its equipment, cadres and partners, and we receive information through the ministry’s page and website and the numbers of the agricultural directorates to inform in case locusts are seen.

Gentlemen, the media, to communicate about any inquiries, to contact the media spokesperson Lawrence Al-Majali: 7896666693