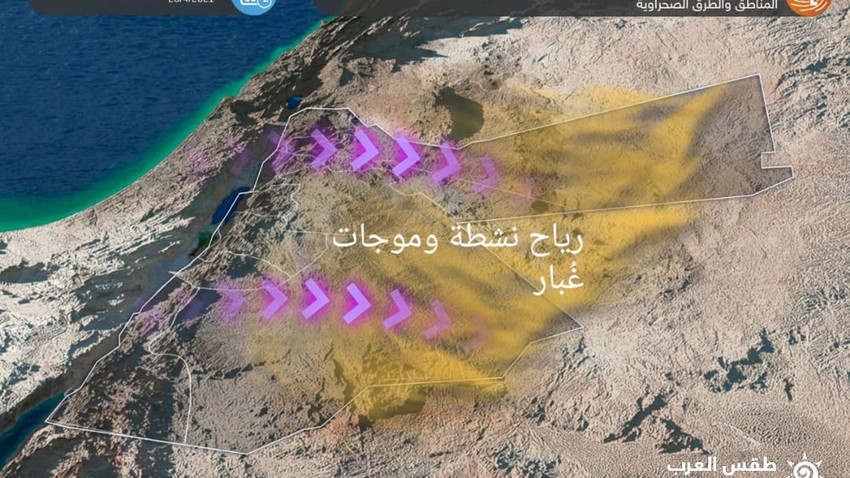 Arab Weather - The Kingdom is affected on Monday by a moderate air mass pushing behind the Khamasini depression, so that the temperatures decrease significantly and significantly, to become around their normal rates relative to this time of time, and the weather is spring moderate and refreshing in general, with the gradual emergence of clouds at different altitudes, especially the low Of them, there is a low probability of limited local showers of rain in parts of the north of the Kingdom during the post-afternoon hours.

The winds will be westerly, their speed gradually increasing to moderate to active speed in the afternoon, and are accompanied by strong gusts with speeds exceeding the 70 km / hour barrier in the south and east of the Kingdom, which will cause the formation of dense dust waves over these areas, especially in the eastern desert, and include, including, permeable desert roads. .

There is a remarkable decrease in nighttime temperatures compared to the previous nights, and the weather turns refreshing and relatively cold to cold, especially with the late hours of the night, and surface humidity levels rise to exceed 90% humidity, which will cause fog to form over mountain heights and potentially fog In parts of the eastern plains.

Low clouds continue to appear, and there is a weak possibility of local showers of rain in limited parts of the north of the Kingdom in the hours after midnight, and the winds are light to moderate westerly, active at times in the eastern regions.

1 - Attention to the risk of reduced horizontal visibility due to dense dust in desert areas.

2- It is recommended to wear light winter coats when outdoor sessions during night hours.

Jordan - Weather Forecast | Average temperatures, moderate and sunny weather in all regions of the Kingdom | Sunday 25-9-2022