Monitoring of the `Pyrocumulonimbus` cloud with a height of 12 km, which resulted from the massive New Mexico fires 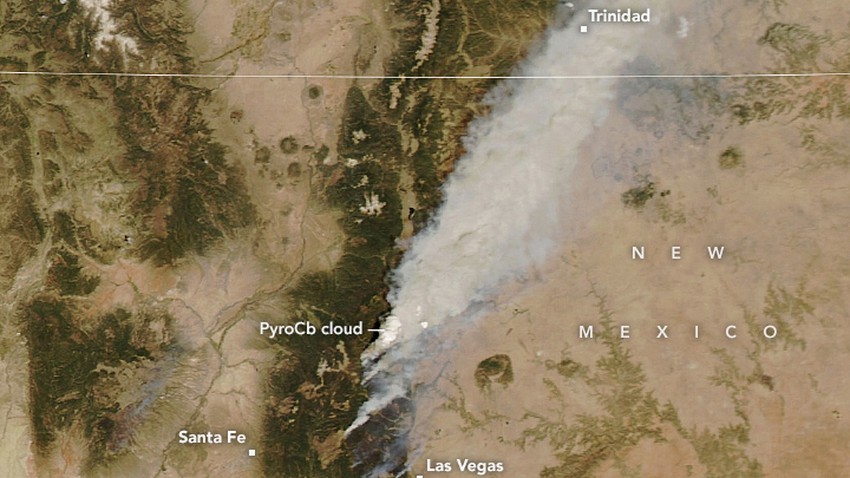 Weather of Arabia - The massive forest fires that ignited at the beginning of the fire season and continued to burn in northern New Mexico, USA, led to the emergence of a cumulus cloud of the type "Pyro cumulonimbus", which extended to a height of 12 km in the atmosphere.

The blaze, now in its second month, is the largest active fire in the United States and the second largest in New Mexico's history. The area scorched over 270,000 acres east of Santa Fe County, destroying hundreds of buildings and homes and evacuating thousands of people.

About 1,800 firefighters are still struggling to put out the fire, which was helped by drought and high winds to spread through dry grasses and trees, and gusts of winds, sometimes with speeds of up to 105 kilometers per hour, prevented the success of aerial firefighting efforts, which include spraying water and scattering flame retardants.

On May 10, 2022, the northern part of the fire produced a "pyrocumulonimbus" cloud, which is a cumulus cloud that forms due to a heat source such as fires or volcanoes. The cloud reached the beginning of the stratosphere, where researchers measured the temperature at the top of the cloud, which was -59 degrees Celsius. This indicates that the cloud has reached the tropopause, which is the boundary between the troposphere and the stratosphere at an altitude of about 7.5 miles (12 kilometers).

This pyrocumulonimbus is small, but it appeared early in the fire season, and this raises the concern that more larger clouds may form during the height of the fire season.

Meanwhile, most of New Mexico is still suffering from severe to exceptional drought within the huge drought sweeping the southwestern part of the United States, where New Mexico has so far seen 244 fires this year, burning more than 360,000 acres, according to the Center for Disease Control and Prevention. This is nearly three times the area that burned in 2021, when 672 fires consumed about 124,000 acres.

What is a 'Pyro cumulonimbus' cloud?

Pyrocumulonimbus are thunderclouds caused by intense heat from the Earth's surface, and they form in a very similar way to cumulonimbus clouds, but the intense heat that results in a strong updraft comes from either large forest fires or volcanic eruptions.

It is for this reason that the prefix "pyro" was used - meaning fire in Greek.

Pyrocumulonimbus clouds were reported during the Australian bushfires in late 2019/early 2020, a number of which were recently observed in Siberia with the Arctic heat wave.

Severe fires have temperatures of more than 800°C and can create their own weather systems. The hot smoke from these fires acts as a column of heat that rises into the atmosphere rapidly, cooling and expanding with altitude. Once cooled sufficiently, water vapor condenses. On the ash to form a gray or brown cloud over the smoke column.

At this point, the cloud is called a Pyrocumulus, but if enough water vapor is available and the updraft continues to increase, it can further develop into a Pyrocumulonimbus.

Similar to other thunderstorm clouds, there may be local downpours, and this rain can create a downward flow of cold air, which can then carry burning pieces of fire and set fire to other spots far from the original source, thus spreading fires further .

In some cases, dry lightning from these storms can strike in the absence of rain, increasing the spread of wildfires, and they are also known to generate dangerous "fire tornadoes". 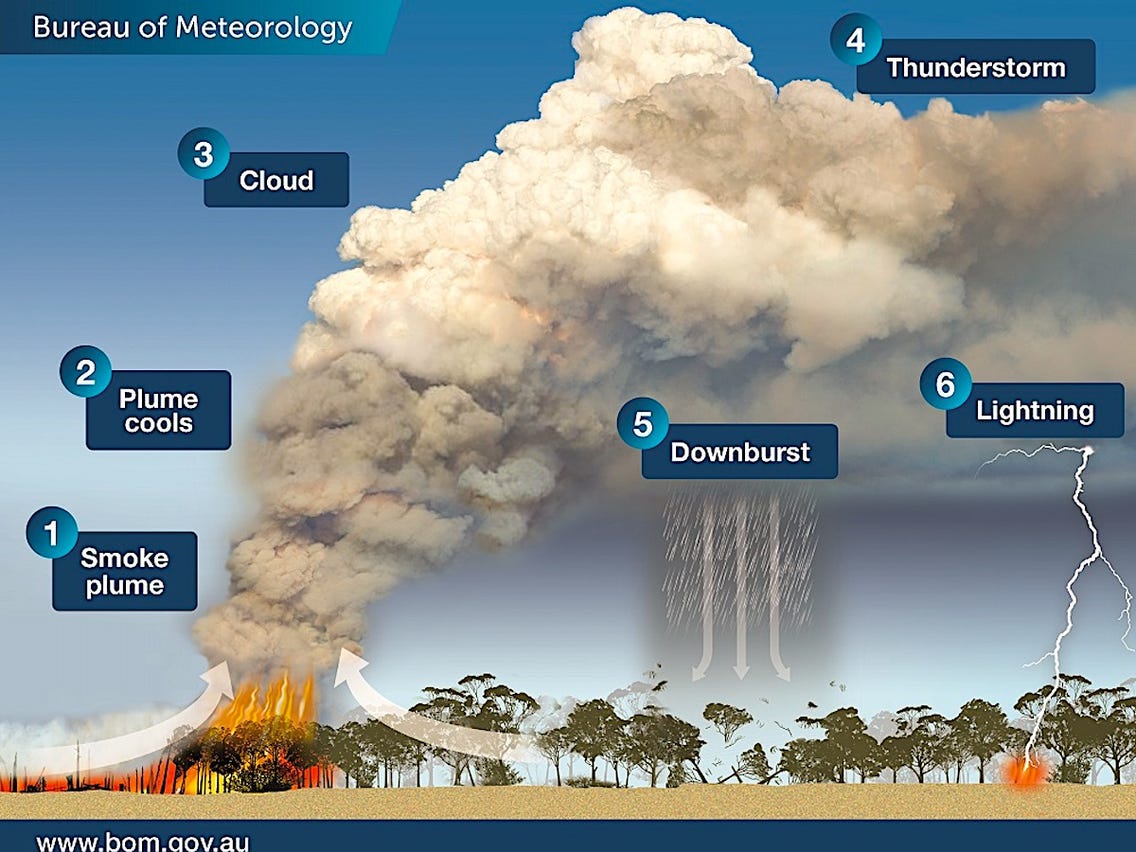 With climate change, these unusual storms can occur more frequently, primarily due to hotter and drier conditions that increase the risk of wildfires.

Read also: Forest fires .. How do they start? And what is the role of the weather in its spread?!

Read also: Learn about the most powerful firestorms..the weather phenomenon that explodes fires in forest fires