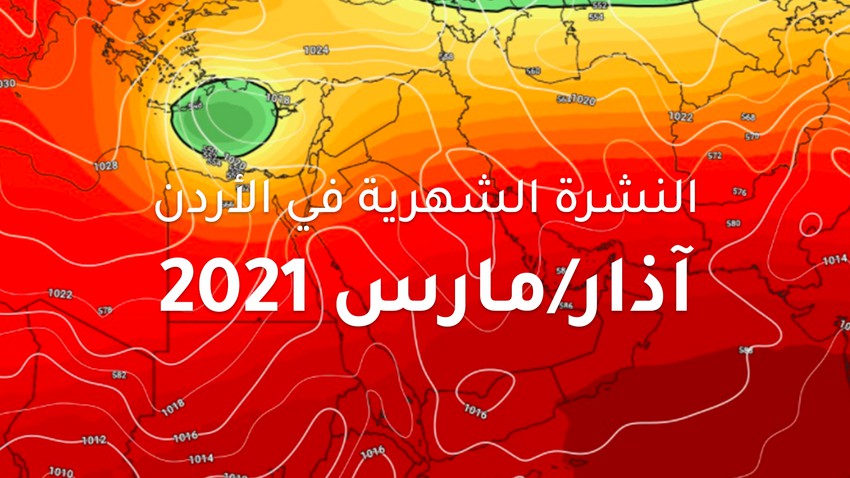 Note: It is strictly forbidden to transmit this information, data and the obligatory newsletter and publish it on social media and other means and / or dispose of it in any way without taking the prior and written consent of ArabiaWeather, under penalty of legal accountability.

The most prominent expected weather phenomena:

Arctic Dome and North Atlantic Ocean
It is expected that the month will start with large fluctuations in the behavior of the Arctic Oscillation Coefficient (AO) between a large decline to reach neutral and possibly slightly negative values ​​during the middle of the first week of the month, to rise again at the end of the first week and the sea of ​​the second week in a strong and possibly approaching +4, amid expectations that the pole will continue to be positive until the end of the month.

Pole positivity means / is related to the decrease in atmospheric pressure in the Arctic Circle extending from high latitudes between 60 and 90 north, and the coherence of the polar air affects and is related to the higher latitudes of the north of the globe, or what is known as the polar cell cohesion and a calm in the movement of polar jet currents.
Due to the relative weakness in the intensity of mid-showstorms, and the air pressure not deepening much in the Atlantic Ocean storms or in the European continent. Those sandwiched between latitudes 60 and 40 north.
It is expected that the North Atlantic Oscillation Coefficient (NAO) will rise and exit from the negative pattern gradually during the first week, to become positive after that until the end of the second third of the month, while expectations after that indicate that this indicator will decrease to approach the neutral and possibly negative pattern in Some days during the last third of the month.
The negativity of that factor is related to the bursting of very cold north polar winds and the outbreaks of air storms on parts of western Europe at some periods. While the positive factor of that coefficient indicates an increase in the atmospheric heights on the south and west of the European continent and the rush of warm and humid winds towards the north and west of the European continent.

This is related in the case of the weather in the Sub-Tropical Region, surrounding the Mediterranean basin, where it is close to the tropical region, where it is strongly influenced by the outcome / product of the polar cell in the north and the activity of the mid-width cell (Ferrell cell), and in our case, and in Expectations remained for the absence of strong extremes in values, and their fluctuation between slight negativity and moderate positive for both AO & NAO fluctuations.

As a result, it is expected that some breaks will occur in the wind movement in the upper atmosphere, or what is known as the refraction of jet streams, which leads to the push of cold air masses south towards the European continent, including parts of its east, God willing, especially in the second third of the month, and without It is unlikely that very humid winds will arrive from the Atlantic Ocean, supporting the hypothesis of a rainy depression around the middle of the month, due to the change and change in the behavior of the North Atlantic Ocean coefficient towards positive, which will push the building of an air height on the southwest of the European continent and move it gradually eastward.

However, the severity of the high arctic oscillation coefficient will make it difficult for the prospective air system to transform into an integrated polarity in the central and eastern Mediterranean, due to the cold polar air being trapped in high shows in the north away from the Mediterranean basin, and thus the absence of a strong breakage in the currents. The polar jet towards subtropical regions (Mediterranean basin).

Then, during the last third of the month, a change is expected in the distribution of weather systems in the northern hemisphere and the European continent, as cold air masses will take a path towards central and southwestern Europe due to a decline and decrease in the values ​​of the Arctic and North Atlantic oscillation coefficients. Towards neutral values ​​and one of them may enter a negative pattern, which results in an increase in air pressure and the stability of the weather in the eastern Mediterranean at the expense of the return or intensification of air turbulence over the south and west of the European continent and the central and western Mediterranean. Rainy weather over the Levant during this period, due to the rapid and temporary fluctuation that may occur on the air systems.

Equatorial region of the Pacific Ocean
The equatorial region of the Atlantic Ocean is witnessing a rise in temperatures while remaining below its general levels, and this is known as the (ENSO) index, as the lanina phenomenon began to weaken and gradually shift to the neutral phase, and this phenomenon is statistically related to the Indian dipole index (IOD), where it is expected to actually start to rise. Slightly and gradually over the next two months (March and April and April 2021).

Indian Ocean and Arabian Sea
The Arabian Peninsula is affected by the (IOD) index, and the positive of this indicator indicates that the surface water temperature from the western half of the Indian Ocean and the Arabian Sea is higher than the general rates, which indicates the increase in the quantities of moisture and water vapor in the air and its rush to the interior of the Arabian Peninsula and the improvement of the rain performance, God willing. The event of the eruption of cold air basins from the north and the formation of instability spring in character.

In view of these and other factors in the atmosphere of those who are interested and that contribute to the crystallization of the atmospheric system, computer modeling projections indicate that the coefficients of fluctuations in the month of March of 2021 will be as follows: