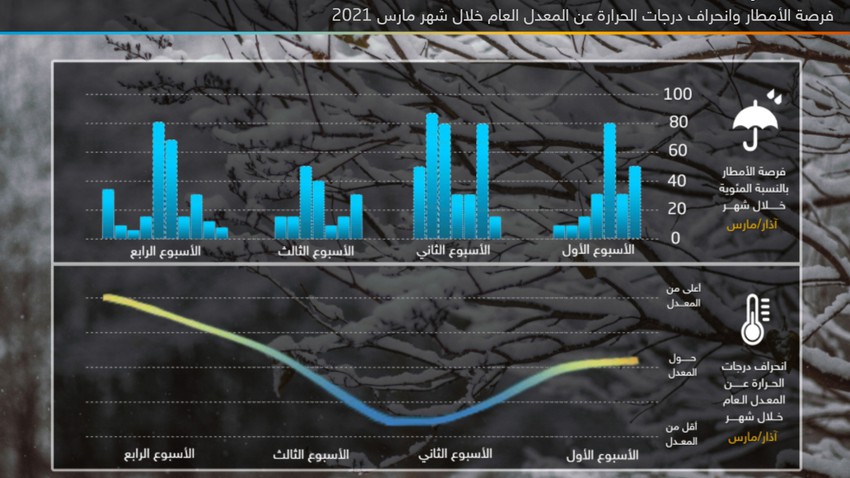 Jordan | March 2021: Great variation in the weather from time to time ... Auspicious month as most regions are close to their annual rates of rain.

Snow is not excluded over high mountains in the second week, and more details cannot be determined now.

- Chances of cumulus clouds and the extension of the Red Sea depression rise in the second half of the month, and therefore the chances of torrents forming increase.

Chances of rain and the deviation of temperature from the general average during the month:

Temperatures: around below average.

Description of weather systems: The weather is generally cold during this period as a result of the Kingdom being affected by a weak extension of a shallow depression accompanied by a cold air mass, so that the opportunity is ripe for showers of rain in the northern regions, including parts of the central and southern regions during the middle of this period, and may be associated With snow showers falling over the summits of the southern mountain heights, and the atmosphere tends to rise during the end of the period due to the eruption of a cold air mass towards the northwest of the African continent, the Kingdom is affected by an atmospheric altitude in all layers of the atmosphere.

Temperatures: around below average.

The chance of torrents: medium.

Snow opportunity : medium on the high mountain elevations in the Levant.

Description of the weather systems: This week is characterized by a sharp reversal of temperatures, through a clear temperature difference between the beginning and the end of the period, it is expected that a radical change will occur in the air system as a result of the significant decrease in atmospheric pressure in important areas of Greenland and the North Atlantic Ocean. In conjunction with the concentration of a strong air height in the west of the European continent, this results in the eruption of cold basins from the east and south of the European continent, where it is expected, God willing, that the Levant countries, including Jordan, will be affected by an air depression that may be highly effective that brings with it rain and low temperatures, as for the chance of snow during This period depends on the nature and shape of the cold eruption, which will become clearer as the time period approaches.

Temperatures: About to above average.

The chance of torrents: medium

Description of the weather systems: the atmospheric pressure continues to rise in the Arctic Circle, which leads to the decline of the polar current in the higher latitudes (a system of convergence of the winds), and it is expected that the humid orbital masses will be active, which may affect the Kingdom of the Kingdom with an air turbulence accompanied by thunderstorms .

Temperatures: About to above average.

Description of the weather systems: It is expected that the temperatures at the beginning of this period will be around their general rates, and towards the middle of the period, it is expected that the cold masses will move east towards Turkey, and this will lead to the extension of some cold air basins towards the Levant region, which works to a "low" response The Red Sea "and its extension northward towards Palestine and the Kingdom, which creates a state of atmospheric instability, and the possibility of forming an air depression with a five-track path before the end of the period increases significantly, which increases temperatures."

Extreme weather was the defining feature in February, caused by Sudden stratospheric warming.  Which hit the Arctic at an altitude of about 30 km in the month of January, the warming in the stratosphere weakened the polar vortex (Polar Vortex), which slowed the western currents in the polar vortex, and thus a polar jet stream was more meandering and rushing towards the lower widths, and more loose For the polar masses and their push away from the axis of the polar dome system, sudden stratospheric warming must have become a pattern and behavior of the polar dome after it happened repeatedly in past seasons, and responsible for this warming is Rossby waves through high and then low temperatures that contribute to the formation of hotspots of increase and decrease Ozone, the lack of ozone that is concentrated in (in the lower stratosphere and upper troposphere) is a major cause of the warming of the stratosphere. The consequences of warming are evident in the temperature anomaly map for the month of November, and it shows the great variation in temperatures between eastern and western European continent.

Also, the Arabian Peninsula suffered during the winter season, especially the Sultanate of Oman, and upon standing up for the reasons, we cannot ignore the phenomenon of laninia and its indirect impact through a decrease in the temperatures of the western part of the Indian Ocean and the Arabian Sea ( IOD- ), in addition to the dry tropical masses that prevailed most Periods of the month, this means that the humid winds did not rush much towards the Arabian Peninsula with specific humidity, depressions and convection.

There is no doubt that the monthly bulletin for this month is considered the most complex due to the difficulty of sensing the numerical models the general system expected due to the transitional period, and in view of the components of the atmosphere responsible after the will of God on the air system that secretes the different ritual patterns, the recovery of the stratosphere and the coherent return of the western flow after the weakness that He was injured, and this was evident on the ladder of Arctic oscillations and was translated on numerical maps with the middle of last February. The Arctic Oscillation Coefficient ( AO ) and the North Atlantic Ocean Coefficient ( NAO ) are expected to record the neutral phase most days of the month of March (between mild positive To mild passivity), which ensures the regular operation of a classical system ( normal behavior of atmospheric pressure values ​​over the Arctic ) , the Madden Julian Oscillation ( MJO ) also indicates its approaching end of the seventh stage and heading to the eighth stage, and as soon as it enters the eighth stage until the activity begins in the phase The first is the end of a full cycle and the beginning of a new cycle, which is expected after the first third of March, which means an improvement in tropical activity and wet tides towards the Arabian Sea, Central Africa and the Sea Red, and this is an indication of an opportunity for rainy tropical events towards the Levant and the Arabian Peninsula in the form of air disturbances.

Saturday - a significant drop in temperature

Thursday a significant drop in temperatures and a pleasant atmosphere

Monday | A slight additional rise in temperatures as the weather continues