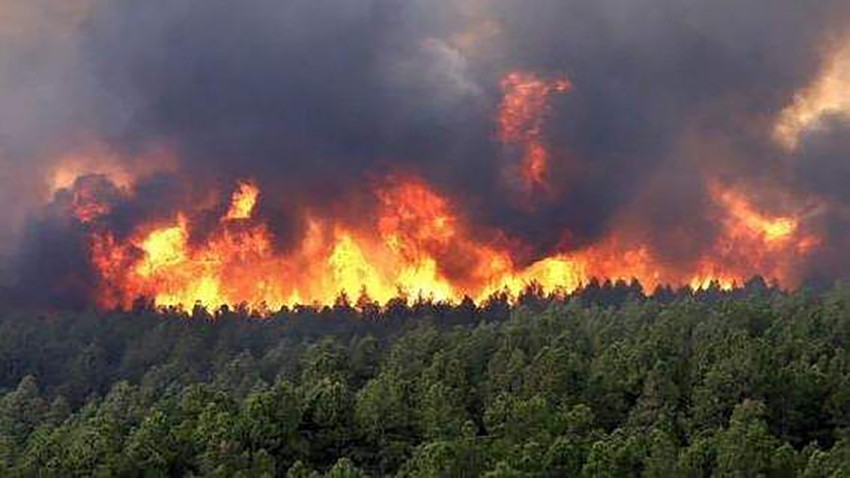 Weather of Arabia - The efforts of firefighting teams to control a fire that broke out in a forest near the city of Chefchaouen in northern Morocco continues for the second day in a row, and the initial outcome of the losses resulting from the fire indicates that about 200 hectares of forests were damaged.

The regional director of water and forests in Chefchaouen, Rachid Al-Anzi, said that "the direction of the wind does not help control the fires" that have been burning since Saturday afternoon, despite the efforts made and the use of four specialized "Kanadir" planes to put out the flames.

He stressed that the fires have not left any human losses so far, explaining that the priority was to "prevent the spread of fire towards the populated areas near the forest."

The rapid spread of the fire prompted the residents to leave their homes after the flames surrounded the houses, and prompted dozens of them to volunteer in the process of extinguishing the fire, in order to secure the agricultural crops that have become threatened.

While the causes of the fire are not yet known, Al-Enezi indicated that high temperatures and winds were two factors that helped in its expansion.

Since Friday, Morocco has witnessed a severe heat wave that is expected to continue until Monday, with temperature reaching 49 degrees in some areas.

It is worth noting that the Kingdom of Morocco witnessed a similar heat wave last month, which led to the outbreak of 20 forest fires between July 9 and 11, affecting about 1,200 hectares, according to the Water and Forest Department in mid-July.

The outbreak of this fire coincides with similar disasters during the recent period in Mediterranean countries, including Algeria and Spain, as well as Greece and Turkey.