NASA is preparing to test the first plane flying on Mars 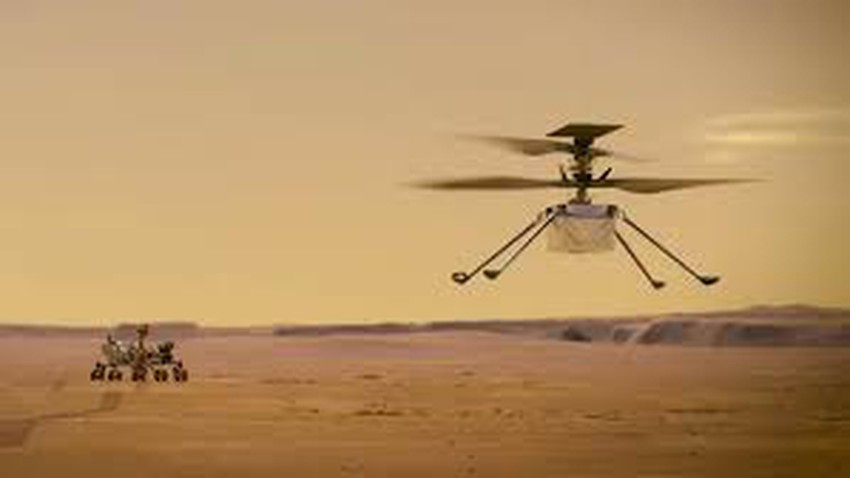 Arab Weather - began space "perseverance" vehicle or Percyverns (Perseverance) of NASA to prepare the most exciting phase of technologically in its mission, a flight by helicopter (helicopter) on Mars!

The Perseverance spacecraft landed on Mars last month and the Ingenuity helicopter was one of the mechanisms that arrived with it on the surface of Mars, and the purpose of loading it on the Mars rover was to prove that flying on another planet is possible.

NASA officials announced on Tuesday that the appropriate site on the surface of Mars for the helicopter flight experiment, which is located north of the area on which the ship Perseverance landed, has been chosen, and the site has been chosen so that the area is naturally flat and does not contain hills or heights, and it should not contain much Rocks that could be dangerous for the helicopter when landing.

The rover passed that site to examine it, and would return to it to launch the Ingenuity helicopter, then back down to watch the flight of the plane from about 200 feet away, to be the first helicopter to fly on a planet other than Earth, and the experience, if successful, would provide opportunities Wider exploration of Mars.

The launch date of the helicopter will not be later than April 8, 2021.

The helicopter called "creativity" or Enginoata (Ingenuity) is a small robotic aircraft weighs 1.8 kg, is made up of the body of softball - sized, long - legged with four prominent, and two sets of blades, so that each group rotates in opposite directions to generate leverage.

How would a helicopter fly on Mars

The helicopter is still connected inside the Perseverance vehicle, but once it exits, it will face several challenges, as the helicopter flight experience will be different from it on Earth, where the mammary planet has a large gravity equivalent to about a third of the Earth's gravity , but the density of its atmosphere is equivalent to only 1% of the density of the Earth's atmosphere . During the day, the surface of Mars receives about half the amount of solar energy that reaches the earth, and temperatures during the night can drop to 90 degrees below zero degrees Celsius, and this can cause the freezing and cracking of unprotected electrical components.

So a helicopter would have to be small to be able to fly in the Martian environment, it had to be lightweight to be able to survive the cold Mars nights, and it had to have enough power to operate the indoor heaters. The plane was tested under similar conditions in NASA laboratories in Southern California.

The helicopter launch will take approximately six Martian days (six days, four hours on Earth). On the first Martian day, the team on Earth will activate a bolt-breaking device and release a locking mechanism that helps hold the helicopter firmly to the belly of the vehicle during launch and landing on Mars. On the second day , a cable-cutting firearm will be fired, allowing the mechanical arm that holds the aircraft to start rotating the helicopter away from its horizontal position. And several steps extend over the rest of the four days, until the world has the opportunity to watch the helicopter flying on the surface of Mars.

Below is an illustrated video of the helicopter flight experience